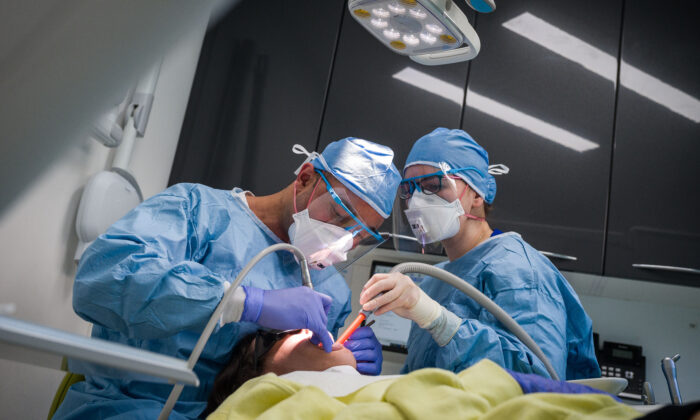 More than 30 million NHS dental appointments were lost during CCP virus lockdowns in England, chairs of a health care watchdog and a dentists’ union said.

In a letter (pdf) to Chancellor of the Exchequer Rishi Sunak, Sir Robert Francis QC, chair of Healthwatch England, and Eddie Crouch, chair of the British Dental Association (BDA), said the “unprecedented backlog” was caused by the “initial suspension of face-to-face care, and ongoing restrictions” during the CCP (Chinese Communist Party) virus pandemic.

The letter said dentistry has risen to be the number one issue raised with Healthwatch over the last 18 months, with the volume of feedback continuing to grow.

It added that 79 percent of patients who raised dentistry issues said they had found it difficult to access timely care.

Commenting on the feedback, Francis said both the volume and negative sentiment had gone “through the roof.”

“We’ve heard from patients up and down the country unable to find care, leaving them in pain and taking matters into their own hands,” he said.

“We’ve also heard from parents unable to register their children with an NHS dentist, as local dental practices weren’t taking on new patients, had gone private, or had closed down.”

Francis said NHS dentistry is now “at risk of vanishing into the void” as it’s hit by an increased demand and a reduced supply.

Healthwatch England previously said that some people will need to wait for up to three years for dental care while patients were reported pulling out their own teeth or being told to use “DIY filling kits.”

Francis and Crouch asked Sunak to come up with a recovery plan as the Chancellor prepares to deliver the result of this year’s spending review along with an autumn budget.

The two chairs said NHS dentistry was underfunded before the pandemic, with “no attempt” made to keep pace with either inflation or population growth when it comes to funding high street services.

According to BDA’s estimates, an additional £879 million (approximately $1.2 billion) is needed to “restore resourcing to 2010 levels.”

Francis and Crouch lobbied Sunak for adequate funding for research costs, and said, “it is crucial that further increases in patient charges are not used to help balance the books.”