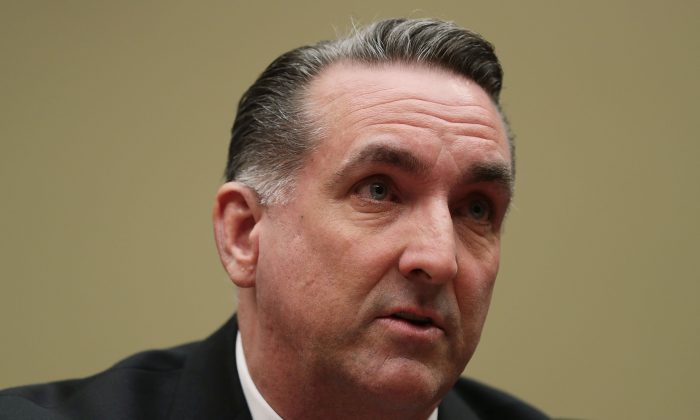 Charles McCullough III, inspector general of the intelligence community, during a hearing before the House Oversight and Government Reform Committee on Capitol Hill on July 7, 2016. (Alex Wong/Getty Images)
US News

On July 22, 2015, a meeting occurred between the FBI and the Intelligence Community Inspector General (ICIG) regarding the mishandling of classified information by Hillary Clinton during her tenure as Secretary of State.

It’s not clear what was specifically discussed during the meeting, and the FBI refused to even confirm the meeting took place. But its significance has recently been boosted by explosive allegations.

Among the thousands of published pages of official documents regarding the FBI investigation of Clinton, the meeting was mentioned only once in a heavily redacted document, confirming that the meeting indeed took place and an evidence slip was created for the original notes from the meeting.

The meeting would have attracted little attention if not for multiple people recently making claims that could explain why it took place.

Rep. Louie Gohmert (R-Texas), along with multiple anonymous sources, has alleged that Clinton’s private server, which she used for official government business, was compromised by a foreign hostile power. That power was receiving Clinton’s incoming and outgoing emails.

That foreign power was China, using a company operating in northern Virginia, The Daily Caller reported, citing a former intelligence officer with expertise in cybersecurity issues and a government staff official—both anonymous.

Fox News confirmed the reporting with two unidentified sources “briefed on the matter,” although it’s unclear whether those sources were different from The Daily Caller’s.

All sources agreed that while the ICIG was reviewing the Clinton emails, they found a piece of code in them that indicated a copy of virtually every email was sent to an outside party. Gohmert, however, declined to specify whether the outside party was connected to China, only saying it was a foreign hostile power unrelated to Russia.

The former intelligence officer said the ICIG “discovered the anomaly pretty early in 2015.” The ICIG briefed the FBI on the matter on three separate occasions, according to the Daily Caller’s sources.

The ICIG had experts on classification matters and was asked to help the State Department check Clinton emails for classified information. The ICIG staffers were “instrumental to the review process,” the FBI stated.

“When [the ICIG] did a very deep dive, they found in the actual metadata—the data which is at the header and footer of all the emails—that a copy, a ‘courtesy copy,’ was being sent to a third party and that third party was a known Chinese public company that was involved in collecting intelligence for China,” the former intelligence officer said.

He said he couldn’t disclose the name of the company.

“There are indications there are other ‘cutouts’ that were involved. I would be in a lot of trouble if I gave you the name,” he said.

The FBI stated in a response to The Daily Caller’s story that it didn’t find evidence that Clinton’s server was breached, which was emphasized by a response from a Clinton spokesperson. But the FBI previously acknowledged somebody may have breached the server and covered his tracks.

In 2016, then-FBI Director James Comey wrote in an internal document that “it is reasonably likely that hostile actors gained access to Secretary Clinton’s private email account.” While Peter Strzok, the agent who led the Clinton probe, called Comey’s assessment “too strong,” he noted that “a sophisticated foreign actor would likely have known about her private email domain, and would be competent enough not to leave a trace if they gained access.”

Strzok was later fired for sending text messages to his colleague and mistress Lisa Page that suggested he was willing to use his official powers against then-candidate Donald Trump during his run against Clinton for the presidency.

‘What Are the Odds?’

President Trump commented on the allegations on Twitter on Aug. 29.

“Hillary Clinton’s Emails, many of which are Classified Information, got hacked by China. Next move better be by the FBI & DOJ or, after all of their other missteps (Comey, McCabe, Strzok, Page, Ohr, FISA, Dirty Dossier etc.), their credibility will be forever gone!” he said.

In another tweet he said: “‘China hacked Hillary Clinton’s private Email Server.’ Are they sure it wasn’t Russia (just kidding!)? What are the odds that the FBI and DOJ are right on top of this? Actually, a very big story. Much classified information!”

“China is a staunch defender of cybersecurity. We firmly oppose and crack down on any forms of internet attacks and the stealing of secrets,” she said.