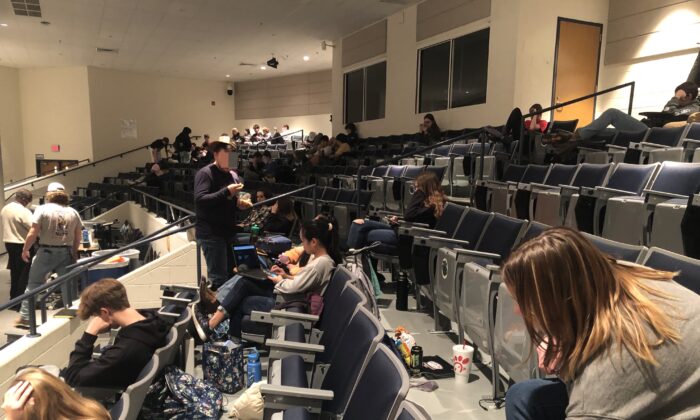 Unmasked students were kept in the auditorium at Woodgrove High School in Purcellville, Va., on Jan. 24, 2022. (Courtesy of Erin Dunbar)
Education & Family News

“You have all chosen not to wear a mask this week. Essentially, that is just defiant of the rules Loudoun County Public Schools have put up,” Shipp said in a video reviewed by The Epoch Times.

He told the students that they would face immediate suspension starting from the next school day on Feb. 2 if they walked into the school without wearing a mask; the suspension wouldn’t end until the students started wearing masks, he added.

In response to a student’s question whether the suspension was legal, Shipp referred to Loudoun County school board policy and affirmed, “At this point, there is suspension.” He also said there was an appeal process to follow. During the suspension, students can still use Schoology, the virtual learning platform, to continue their studies, according to Shipp.

Caroline and Laura Thomas’s letters from Woodgrove High School were identical except for student ID and other personal information. Any students “who willfully continue to refuse to follow COVID mitigation measures as required by Loudoun County Public Schools will be suspended from school” for “disobedience” and “defiance,” according to the letters.

Clint Thomas, the students’ father, questioned the “double standard.” While the school district cited the Virginia Department of Health’s (VDH) interim Guidance for COVID-19 Prevention in Pre-K–12 Schools under Democratic Gov. Ralph Northam, it has declined to follow VDH’s updated guidance under Republican Gov. Glenn Youngkin, who was inaugurated on Jan. 15.

VDH’s updated guidance for Pre-K–12 schools states the roles and responsibilities among parents, schools, and public health institutions. The decision of masking and vaccinating lies with parents.

Clint Thomas told The Epoch Times that the reason for the suspension was “not masking” but “defiance.”

“[Principal Shipp] is pushing them to wear a mask so he doesn’t have to suspend them,” he said.

LCPS is one of the districts in the state that have decided to keep the mask mandate, despite Youngkin’s executive order that gave the masking decision to parents. Virginia has more than 130 school districts, with about 50 following the same course as Loudoun County.

Madison Dunbar, a sophomore at Woodgrove who also was unmasked in school last week, told The Epoch Times that it’s ridiculous for LCPS to force students to choose between masking and in-person learning.

Kayla, an 11th-grader at Woodgrove, also didn’t wear a mask to school. During the week, she repeatedly asked teachers and administrators, “Where is my in-person learning?” She said the educators simply referred to Schoology, LCPS’s virtual learning platform.

She said that she felt that the unmasked students were being shamed. For example, the auxiliary gym they were sent to from Jan. 25 to Jan. 28 had an uncovered window.

“The masked kids would just sit there and take pictures of us, and laugh at us, every day,” she told The Epoch Times.

Caroline Thomas, who has compiled a daily journal of her experience, also wrote about the separate exit. She noted that she didn’t get an answer when asked why she had to leave the school from a different exit than masked students.

“I’m sure it’s because they didn’t want us to ‘infect’ the rest of the school,” she wrote.

“Every day felt like a prison. Each day gets crazier and crazier.”

Emma, Kayla’s younger sister and a 9th-grader at Woodgrove, told The Epoch Times: “Teachers really didn’t care about our education. They just brushed it under the rug like we didn’t need to learn.”

“They were trying to do the right thing but kind of caught in the middle. They want to follow what they’re told to do but want to hold their ground because they know their freedoms.”

LCPS spokesperson Wayde Byard said that he had no comment when contacted by The Epoch Times about the suspension plan and VDH’s updated guidance.