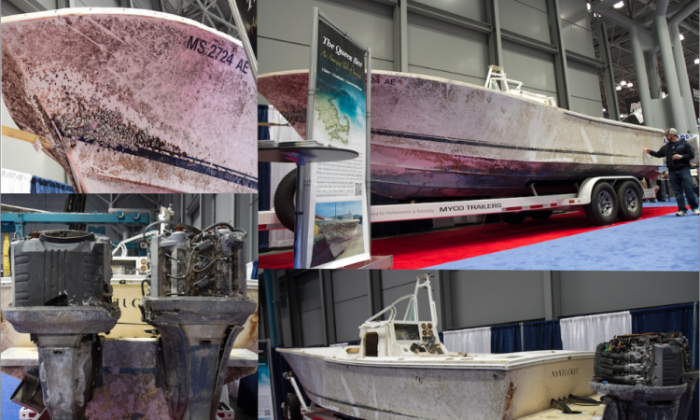 Joan C. Maxwell, president of Regulator, the U.S. company that built the Queen Bee, smiles as she tells the story of the boat and how it survived being lost at sea and unmanned for over three years. (Benjamin Chasteen/The Epoch Times)
US

NEW YORK—Among the shiny new boats displayed at the 2013 New York Boat Show, tucked in the corner, sits a barnacle covered Regulator 26. The t-top is ripped off and the twin Yamaha engines’ innards are exposed, but it is intact.

In spite of its weathered appearance, the Queen Bee has proven to be the most helpful marketing tool for Regulator, a North Carolina-based boat manufacturer.

In August 2008, Scott Douglas and Rich St. Pierre were fishing off the coast of Nantucket in the Queen Bee when a rogue wave tossed them overboard. The pair swam a mile back to shore, but the boat stayed at sea, it’s motor still running.

Douglas and St. Pierre figured the boat was a goner and lost all hope of finding it.

On Jan. 25, 2012, the Spanish Coast Guard discovered the Queen Bee. It had been three and a half years. The boat had traveled 3,000 miles unmanned—and was fully intact.

“Even though it has been almost a year, we are still amazed when we look at it,” Joan Maxwell, president of Regulator said at the New York Boat Show on Thursday. She said with a new fuel line, the Queen Bee would be ready for another voyage.

Maxwell said the boat’s survival is a testament to Regulator’s commitment to durable construction. While the company is well respected in the industry, winning numerous industry awards, the national attention the story received was priceless.

“We couldn’t have bought that kind of PR,” said Maxwell with a laugh. She said it could not have come at a better time, as the winter of 2011 had been particularly rough on the company. The publicity from the story of the unsinkable ship has helped turn the company around.

The Queen Bee is a showcase exhibit at the 2013 New York Boat Show at the Javits Center, which runs through Sunday, Jan. 6.