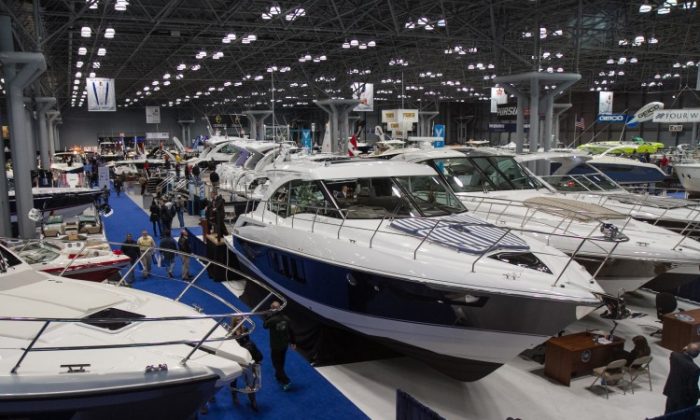 NEW YORK—The chilly temperatures outside didn’t suggest boating weather, but those looking to stretch their sea legs during the summer months have to place their orders now to enjoy the picturesque June sunsets in the harbor.

The New York Boat Show, the longest running in the world at 108 years, kicked off boat show season by dropping anchor at the Javits Center Thursday for a four day tour, showcasing the latest in marine toys, including plenty of options for people who lost boats or had boats damaged in Superstorm Sandy.

Thousands of boats were destroyed or damaged in New York and New Jersey, causing manufacturers and dealers to see the potential for replacement sales—however it remains to be seen if people will replace their watercraft after what happened.

The show is more than a historic event—it is a barometer for the marine market, where trends and expectations are set for the season.

After a rough 2011, the tide turned in 2012 with a 10 percent increase in new powerboat sales, according to the National Marine Manufacturers Association, but a lot of uncertainty remains following the devastation of Sandy.

In the United States, 97.4 percent of boat manufacturers are small businesses, and 83 percent of the boats sold in the country are made in United States. Recreational boating has a $72 billion annual economic impact, according to data including in the show’s press release.

It is still too early to know how sales will go this year, said Jon Pritko, manager of the New York Boat Show, but “time will tell.”

Pritko reported no dealers pulled out of the boat show due to Sandy, but some altered the boats they chose to showcase due to damage they sustained.

“A lot of dealers not only had their businesses affected, but also their personal lives,” said Chris Squeri of Atlantic Yacht Haven out of Freeport New York.

Squeri, who is also executive director for New York Marine Trades Association, said his dock in Freeport had minimal damage, however, others in the association whose docks were in the open bay sustained major damage.

Squeri reported a real sense of community following Sandy, with everyone banding together to help clean up one dock at a time.

Manufacturers provided dealers with generators and water after the storm, showcasing a true sense of community. “That is what makes it special. You saw people’s true colors,” said Squeri.

Squeri was optimistic about the future of the manufacturing and docking side. “We are a resilient bunch,” he said with a smile. The customer side, he was less sure of. “As long as the economy is good, we will be fine,” Squeri said.

A few hundred feet away, a lawyer from New Jersey stepped into a 2013 Regal 42′ Sport Coupe Cruiser at Strong’s Marine’s booth. He explained to the salesman he had lost his boat in the hurricane and was looking to replace it.

“Are you looking for anything in particular?” the salesman from Strong’s Marine asked.

“Anything that floats and doesn’t have holes in it,” the lawyer said.

The sales man laughed heartily. “I think we can find something for you.”

Capt. Cyril Fabijanic of Strong’s Marine looked on. “Hopefully that is a sign of what’s to come,” he said.