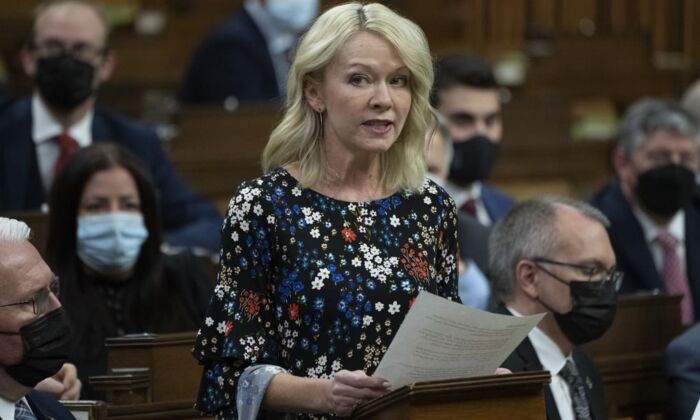 With Canada steadily increasing sanctions on Russia to respond to its invasion of Ukraine, the Conservative Party is calling for the government to use the country’s hydrocarbon resources to hurt Russia economically.

“Safety, security, sovereignty—those must be all top priorities for any government, and it should be Canada’s priority especially now,” said interim Conservative leader Candice Bergen during question period on March 1.

“The longer Canadian oil, gas, and LNG stay in the ground, the bigger Putin’s wallet gets, and the more countries like Ukraine and others will continue to be hurt and threatened by Russian aggression. More than ever, the world needs Canadian energy.”

Bergen asked Prime Minister Justin Trudeau if in that context he would change his stance toward Canadian hydrocarbons. Trudeau’s government has pledged to reduce reliance on gas and oil and to shift to a “green” economy.

Trudeau replied that his government has been there for the energy sectors of producing provinces and that it would “continue to work to ensure that we are supporting workers in the energy industry, even as we ensure that we’re moving forward in ways that reduce carbon from our atmosphere and create a better future with good jobs for everyone.”

“We’re actually moving forward with the Trans Mountain Pipeline expansion, which the Conservatives couldn’t get approved and couldn’t get built,” he said.

The federal government purchased the Trans Mountain from Kinder Morgan in 2018.

“Does the prime minister agree that in any circumstance, in particular the circumstances we’re witnessing in Ukraine, that it would be irresponsible to use the war and its humanitarian consequences as an opportunity to promote oil exports from Western Canada?” he asked.

Trudeau took a different tone when responding to Blanchet, seemingly leaving the door open to the possibility of helping Europe with energy.

“The fact is that Europe still relies very heavily on Russian oil and gas, and we as a world have to try to offer alternatives to Russia for Europe,” Trudeau said.

“And we know that the global economy has to decarbonize, but we haven’t quite got there yet. But we will provide the resources necessary to help our European friends.”

Canada announced in recent days it was stopping Russian gas imports, which represented 3 percent of total imports in 2019. It also announced on March 1 that it intends to ban Russian-owned or registered ships and fishing vessels in Canadian ports and internal waters.

Dan McTeague, gas price expert and president of Canadians for Affordable Energy, proposed such a measure on Feb. 28 in comments to The Epoch Times, noting that Russian vessels use Canadian waters to deliver 800,000 barrels of oil a day to the U.S. West Coast.

He said the next thing for the government to do is to build a cross-country pipeline.

“Canadians are now realizing the absurdity of an oil-rich nation like Canada needing to import. There’s growing momentum that pollsters will soon clue in to that favours building continent-wide pipelines,” he said.