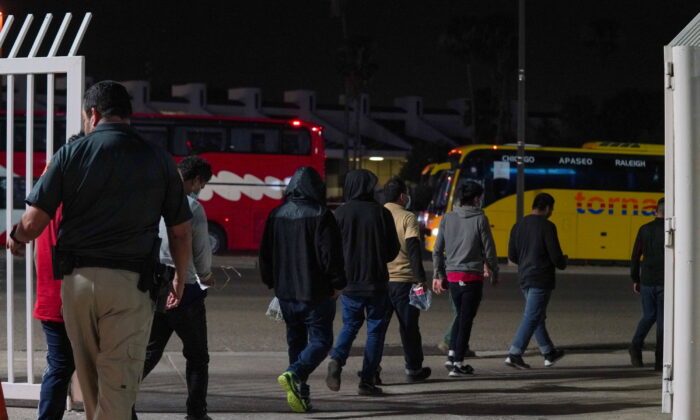 Migrants who recently crossed the border and were caught, are directed to walk back to Mexico, in Laredo, Texas, on June 15, 2022. (Veronica G. Cardenas/Reuters)
Immigration & Border Security

Border crossings along the United States’ southwest border with Mexico saw a decline in June from the previous month but continue to remain high when compared to the past three years.

There were 207,416 land encounters along the southwest border in June, a nearly 14 percent decrease from May’s 240,991 encounters, latest data from the U.S. Customs and Border Protection (CBP) showed.

Of the total June encounters, 26 percent were individuals who had at least one prior encounter in the previous 12 months, which is higher when compared to the average one-year re-encounter rate of 15 percent during the five years between fiscal 2014 and 2019.

In a July 15 press release, the CBP noted: “The large number of expulsions during the pandemic has contributed to a higher-than-usual number of migrants making multiple border crossing attempts, which means that total encounters somewhat overstate the number of unique individuals arriving at the border.”

CBP Commissioner Chris Magnus said in a statement that the department is “committed” to implementing strategies to cut down irregular migration.

“My message to those considering taking this dangerous journey is simple: this is not an easy passage, the human smugglers only care about your money—not your life or the lives of your loved ones, and you will be placed in removal proceedings from the United States if you cross the border without legal authorization and are unable to establish a legal basis to remain,” he said.

Nationwide, drug seizures rose by 25 percent in June compared to the previous month. Cocaine seizures rose by 62 percent, heroin by 49 percent, fentanyl by 41 percent, and methamphetamine by 14 percent, the CBP press release stated.

Almost 1,223 shipments containing counterfeit goods worth over $166 million were seized in June. The CBP identified more than $20 million in duties and fees owed to the U.S. government through 40 audits it finished in the month. The agency also issued 5,618 emergency action notifications related to prohibited or restricted animal and plant products entering the country.

Increasing migrant numbers as well as continuing criminal activities along the border have attracted criticism against the Biden administration. In a recent statement to Fox News, Rep. Michael Cloud (R-Texas) blamed the White House for being “derelict in their duty” to protect the nation.

“The Biden administration continues to shrug off Americans’ calls for increased border security while criminal cartels exploit and attack our nation,” he said.