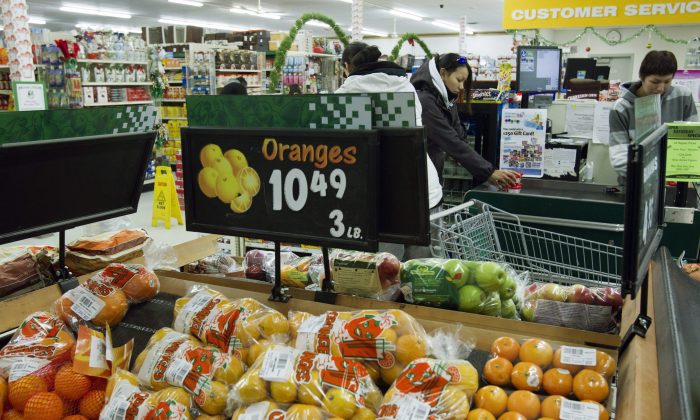 Shoppers face high prices for food and household goods at a store in Atawapiskat, Ontario, Dec. 17, 2011. The Nutrition North program does not ensure that retailers pass the full subsidy on to consumers, a report by the Auditor General finds. (The Canadian Press/Frank Gunn)
Canada

A new Auditor General’s report on the Nutrition North Canada program raises questions about the delivery of the program, particularly to remote communities.

The program, which replaced the Food Mail program in 2011, operates on a fixed budget of $60 million, of which $53.9 million is allocated to a subsidy that in theory helps northern retailers, food suppliers, and distributors lower the prices of nutritious foods.

But the Department of Aboriginal Affairs and Northern Development can’t verify whether those savings are reaching the communities it is intended to help, Auditor General Michael Ferguson said in his annual report, released Nov. 25.

“We concluded that the department has not done the work necessary to verify that the northern retailers are passing on the full subsidy to consumers,” the report reads.

“The northern retailers have attested to the department that they do pass on the full subsidy to consumers. If the department was able to verify that this was the case, some of the public skepticism surrounding the program could have been lessened.”

Terry Audla, president of Inuit Tapiriit Kanatami, says food prices in the north are so high that in some cases people are going hungry.

“It is quite abysmal that parents have to forgo meals in order that their children are fed,” he said.

Audla adds that although two-thirds of the meat eaten in northern communities comes from wild game, an aging population among current hunters could present a long-term issue.

The Canadian Medical Association says the Department of Aboriginal Affairs needs to ensure that the funds are being spent as intended. The CMA also has concerns regarding the subsidies for some foods. The program provides higher subsidies for fresh and frozen fruits and vegetables as well as bread, milk, meat, and eggs. However, items such as processed cheese spread are also given a subsidy.

“It does raise some questions about how the lists were generated in the first place” said CMA president Dr. Chris Simpson.

“Going to the program’s own website, they actually listed ice-cream as one of the foods that would be eligible for a subsidy. Something was lost in translation pretty quickly there.”

Simpson believes that the problems highlighted by the program may be a snapshot of larger issues in how Canada approaches health. A cardiologist, he explains that many people he treats with heart disease are in their early 40s and 50s, with disadvantaged socio-economic conditions and regions worsening the issue.

“As a country we have lagged behind many other countries, particularly those in Europe that have invested pretty strategically in these social determinants such as nutrition, and we are recognizing that these things disproportionally affect vulnerable populations like children, seniors, and aboriginal people much more than others,” he said.

Priscilla Settee, assistant professor in the Department of Native Studies at the University of Saskatchewan, worries that some questions are not being asked during the current discussion.

“Is transporting southern foods into the north any definition of food sovereignty for indigenous people?” she asks.

“The issues are much larger, including issues like land security, land safety, and protection of land and resources as a source of indigenous foods. And often so much of the political issues are seen through a singular lens, which doesn’t begin to address the depths of the problem.”