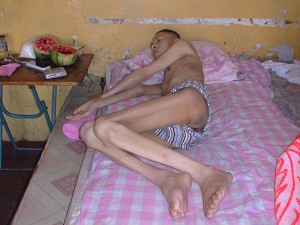 In recent years, there have been numerous reports of Falun Gong practitioners held in Chinese forced labor camps, prisons, and psychiatric hospitals being poisoned with unknown drugs. Usually mixed into meals or directly injected into their bodies, the drugs have caused symptoms of impaired motor control in walking, becoming incontinent, and loss of memory and consciousness. Some victims' lives have even been endangered.

According to the information compiled by Minghui.org, a main Falun Gong website, thousands of Falun Gong practitioners have suffered from psychiatric damage caused by forced injection of unknown drugs. Among them, some have died of damage to their central nervous system. According to statistics, the number of the reported cases is over 800. The following are excerpts from some of these reports:

Ms. Dong Jingzhe, 32, an advertising designer living in Shenyang City, was forcibly taken away from her home on March 5, 2005 by agents from the local national security bureau and armed police department. On March 8, she was sent to Masanjia Forced Labor Camp, where her lower limbs were paralyzed and poisoned with unknown drugs through intravenous injection, causing the loss of ability to take care of herself.

Ms. Zhang Shuzhen, a woman living at a farm village of Zhuolu County, Hebei Province, was kidnapped in her home on March 13, 2007, by Zhao Xuan, Li Zhiming and other officers from the Zhuolu County 610 Office. [1] She was taken to the Zhuolu County Police Department, where police officer Dong Fei and others injected her with unidentified substances, causing her to completely lose all muscle control. The following day, she was sent to Donghuan Road Mental Hospital in Zhuolu County. On March 16, Li Zhiming from the Zhuolu County 610 Office drove Zhang Shuzhen home where she laid unconscious on a stretcher. Zhang is now paralyzed and incontinent, having lost the ability to control urination and bowel movement, and drifts in and out of consciousness.

Falun Gong practitioner Wu Chunlong, from Jiamusi City in Heilongjiang Province, had developed a serious case of arthritis and could not walk. After practicing Falun Gong, his illness was cured. In March 2005, he was arrested and sent to Jiamusi Forced Labor Camp. A few days after suffering a force-feeding, during which an unknown drug was added, he went in and out of consciousness and became incontinent. Seven to eight days later, he lost all feeling from his lower back to his knees. He was unable to move his legs and his mind had become blurry. By the time he was returned home, he had been reduced to skin and bones. He couldn't think clearly, and had no facial expression. He appeared to hold no memory, thoughts or reflections, and couldn't even recognize his father. On August 20, 2005, at the age of 30, Wu Chunlong passed away.

Ms. Sun Yan, 42, a resident of Jilin City, was arrested in her home on March 15, 2007, and is currently incarcerated at the 605 Prison Ward of the Jilin City Detention Center. After being arrested, Sun Yan was sent to the Jilin Municipal Police Canine Training Center for criminal investigation, where she was tortured with several electrical batons, leading to incontinence. Afterwards Sun was injected with unknown drugs and returned home. She can no longer move or talk.

Ms. Zhang Fuzhen used to be an employee of Xianhe Park management center, Pingdu City, Shandong Province. She was arrested in 2001 and sent to Pingdu City 610 Office's Brainwashing class. She never returned home. According to eyewitnesses, the police stripped her naked and shaved her entire head. They tied her to a bed with her four limbs stretched out for long hours. She suffered torture, insult, and was injected of an unknown toxic substance. After the injection, Zhang was in so much pain that she nearly had a nervous breakdown. She struggled in great pain on the bed until she died. Local officials from the 610 Office reportedly witnessed the whole process. Ms. Zhang Fuzhen died at the young age of 38 years old.

The overwhelming persecution against the Falun Gong spiritual movement since 1999 has become a major concern worldwide. This report is simply an excerpt from a few articles about the use of harmful drugs in the torture of Falun Gong practitioners, and a partial reflection of the overall situation of Falun Gong in China.

[1] The 610 office is an agency specifically created to persecute Falun Gong, with absolute power over each level of administration in the Party and all other political and judiciary systems.