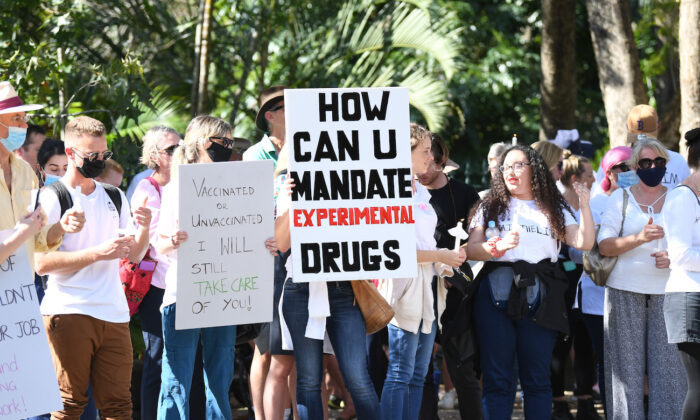 Protesters hold up signs as they march across Victoria Bridge during a rally against a mandatory Covid-19 vaccine in Brisbane, Australia, on Oct. 1, 2021. (Dan Peled/Getty Images)
Viewpoints

The Western Australian (WA) government under Premier Mark McGowan is imposing mandatory vaccinations on about 75 percent of the state’s workforce, enforceable with massive fines of up to $100,000 for employers and $20,000 for workers.

This, in a democracy, is to be effected by mere directions under the Public Health Act, most of which are yet to be made.

They will not be submitted to the executive council where the governor would normally need to be assured that he has the legal power to make them. Nor will there be any need for the orders to be tabled in Parliament, with either house being able to disallow them.

Yet such safeguards were once required across Australia, even in colonial times.

Instead, practices typical of a dictatorship have become normal.

At least the supporting advice from the WA’s Chief Medical Officer Dr. Andrew Robertson has been published. This has been rare in most jurisdictions where health advice, including that supplied to the National Cabinet, has been treated as if it were a state secret.

In his advice, Robinson does concede the risk of vaccination, but says these outweighed the benefits.

Unfortunately, he does not explain this, nor does he discuss the fact that the vaccinated can both be infected and infect others.

In the quest for protecting the vulnerable, the better protection would surely be through testing which is becoming cheaper and more accessible.

Testing could also show those who have been infected and have recovered. According to some experts, they could have a greater immunity than those vaccinated.

We do not know enough about the Wuhan virus to be too certain about imposing such a strong policy for vaccination, particularly when this may prove to be as unjustified as many of the lockdown measures have shown to be.

It is established that some people, including the young, have experienced potentially serious heart conditions, myocarditis, and pericarditis, after being receiving the vaccination.

With talk of boosters, the requirement for vaccine passports could put Australians under life-long political control, with the warnings of some experts against the effects of excessive vaccination being ignored.

Many Australians are even asking why they should not continue to enjoy their long-believed right, supported by very clear words from Prime Minister Scott Morrison, that they are entitled to make the final decision as to whether they should be vaccinated.

It is surprising then, that he and the federal government have not rushed to support federal MP Craig Kelly’s bid to pass a “No Domestic COVID-19 Vaccine Passports Bill,” which would aim to protect the “right of Australians to make their own health decisions in relation to COVID vaccination.”

Were such federal legislation challenged by WA, the federal government could argue persuasively that it was made under federal power to legislate with respect to medical services and that this would naturally prevail constitutionally over any conflicting state law.

WA could argue, much less convincingly, that the federal power specifically excludes “civil conscription” and therefore does not extend to mandatory vaccinations which is thus a purely state matter.

Without such federal legislation, any legal argument that mandatory injections are invalid as a breach of fundamental rights could attract a similar rejection to that recently handed down by the Justice Robert Beech-Jones in the New South Wales (NSW) Supreme Court.

It is unlikely that the present High Court would overrule this, whatever decisions were made in the NSW Court of Appeal. And all this would take a long time to resolve.

That is why the federal government should now get behind Kelly’s Bill.

In what critics would say was artificially legalistic, Justice Beech-Jones said that “so far as the right to bodily integrity is concerned, it is not violated, as the impugned orders do not authorise the involuntary vaccination of anyone.”

It was conceded that the orders curtail “freedom of movement, which in turn affects a person’s ability to work and socialise.” But these he ruled, were restrictions which the NSW Public Health Act clearly authorises.

If the federal government does not support Kelly’s Bill, the better legal case would be to challenge the directions as an exercise of misfeasance in public office, a little known actionable civil wrong.

There is a strong precedent for this in Justice Steven Rares’s 2020 Federal Court of Australia judgment against the government in “Brett Cattle Company Pty Ltd v Minister for Agriculture,” concerning the Gillard government’s live cattle ban.

The government, under strong National Party pressure, decided not to appeal his decision, no doubt because this would have been extremely unpopular in rural circles.

A powerful decision, it might not have withstood appeals to the full Federal Court and the High Court.

This is because courts have usually taken the view that in challenges to subordinate legislation made by the executive, such as the WA directions, they should be deferential to the executive.

What would be the best argument to encourage courts to subject mandatory vaccination to the same tests applied by Justice Rares? These were the tests of reasonableness and proportionality in relation to the impact of the live cattle ban government on the common law rights of ordinary Australians.

That best argument could well be that the court should no longer show any deference to an executive which is no longer subject to the usual checks and balances.

Indeed, the fact that these checks and balances have been gradually whittled away over the years will not escape the judges.

The people will be looking to the judges for justice as a last resort. For the system to hold and to enjoy the support of the people, the judges should not fail them.

Mandatory vaccinations are unjustifiable and may well be the edge for the maintenance of authoritarian rule by the politicians without any of the usual safeguards.

The immortal words of the great Lord John Acton echo down the ages: “Power tends to corrupt, and absolute power corrupts absolutely.”

What is truly extraordinary is that Australians today are less free than they were under British colonial rule.