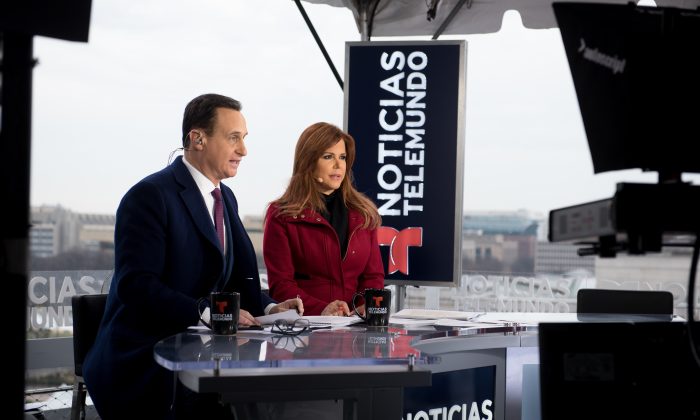 Jose Diaz-Balart and Maria Celeste Arraras participate in the Telemundo 2017 Presidential Inauguration broadcast at The Newseum in Washington, D.C., on Jan. 20, 2017. (Noam Galai/Getty Images)﻿
US News

Spanish television networks in the United States ignored a jobs report released last week showing that Hispanic unemployment dropped to the lowest level ever recorded in June, according to a report by the Media Research Center (MRC).

National evening newscasts by Telemundo, Univision, Azteca America, and Estrella TV made no mention of the historic milestone for Hispanics in the United States. CNN en Español, Directo USA, and NTN24’s Informativo also ignored the news.

The unemployment dropped to 4.6 percent in June, while a net of 164,000 Hispanics entered the labor force, according to the Bureau of Labor Statistics. While on the campaign trail, President Donald Trump vowed to create jobs for Hispanics and blacks if he was elected.

“The networks’ stone-cold silence, in the face of the evidence of the Trump administration’s fulfillment of that pledge for Hispanics, African-Americans and the country as a whole, is as clear an indication as any of the depth of the bias that clouds and sullies the news judgement of these media outlets,” wrote Ken Oliver, director of MRC Latino and former White House director of specialty media.

On the night of July 6, the networks focused on a range of other less consequential topics, including coverage of World Cup Soccer. Telemundo ran a report on “World Kissing Day.”

The media blackout on the employment report extended into the weekend. Telemundo and Univision made no mention of the record-setting numbers on the July 7 and July 8 evening newscasts.

The curious silence on the job report hasn’t stopped Trump from making significant gains in approval among Hispanics. A Harvard/Harris poll released during the last week of June showed that Trump’s approval rose 10 percent among Hispanics.

Hispanics have historically leaned toward Democrats, and the latest polls are a cause for alarm for the party as midterm elections approach in November. Hispanic voters also generally favor Trump’s immigration agenda. The majority of Hispanics believe that current border security is inadequate and that immigration law enforcement needs to be stricter, rather than looser, according to a recent Harvard-Harrison poll.