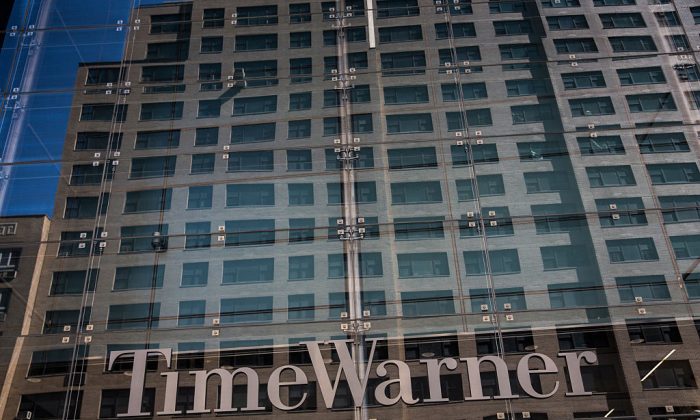 Time Warner Cable headquarters are seen in Columbus Circle on May 26, 2015 in New York City. Charter Communications completed its acquisition of Time Warner Cable in May 2016. (Photo by Andrew Burton/Getty Images)
Business & Economy

And accuses Charter of not being truthful
By Emel Akan

Univision made attempts to engage in renewal negotiations with Charter in May and June. However, Charter responded “with stalling, obfuscation, and refusal,” said the complaint.

“Univision had no alternative because Charter has outright refused to negotiate a renewal agreement with Univision,” the company stated in its press release.

“Charter insists that the contract Univision had with Time Warner Cable is controlling, rather than its own contract with Univision.”

In addition, the agreement with Charter contains a “heavily negotiated provision,” which allows Univision to end the Time Warner Cable contract under certain conditions by the end of 2016.

Charter bought Time Warner Cable and its related entities for more than $70 billion in May 2016. The resulting company, New Charter, serves almost 24 million customers, making it the second-largest cable company in the United States trailing Comcast.

Charter bases its argument on the preposterous theory that as a result of the merger, Time Warner Cable, rather than Charter, is managing all these cable systems.
—  Univision

“New Charter is now flagrantly breaching Univision’s contract with Charter by using the acquisition as a pretext to unilaterally impose license fees that are dramatically below current market license fees,” stated Univision in its complaint.

Instead of renewing the contract, Allan Singer, Charter’s senior vice president of programming, claimed they would apply the terms of the Time Warner Cable Agreement until June 2022, according to the complaint.

“Charter bases this argument on the preposterous theory that as a result of the merger, Time Warner Cable, rather than Charter, is managing all these cable systems,” said Univision.

Charter has created a shell company called Spectrum Management Holding Company LLC for the merged entity and according to the complaint Charter claims that Spectrum Holding qualifies as a “Time Warner Company” and hence managing the cable systems.

Univision accused Charter of not being truthful.

“Everyone knows that is not true: the longstanding CEO and the executive team of Charter, as well as its pre-existing board of directors, now manage and control all of the cable systems,” Univision said.

“Indeed, Charter pitched this deal to regulators, its subscribers, and the public, as one where its management team would take control of the combined company, and that is exactly what happened.”

Univision is expecting to incur losses due to this conflict.

“The difference in these license fees constitutes damages to Univision, the exact amount of which will be determined at trial,” said the complaint.

Univision is the largest Spanish-language broadcaster in the United States and owns a variety of 24-hour cable networks, 59 local-TV stations, and 67 radio stations.

Just a few months after the closing of the mega deal, the conflict is a test of the cable operator’s power.

“We have a long-term contract with Univision and we expect them to honor it,” a Charter spokesperson stated in an email.