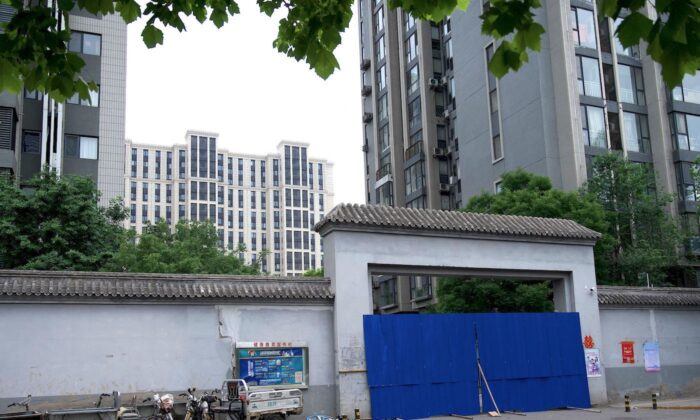 A barricaded entrance to a residential area is seen under lockdown due to COVID-19 restrictions in Beijing, China, on May 24, 2022. (Noel Celis/AFP via Getty Images)
CCP Virus

As Beijing’s COVID-19 cases increase, more and more neighborhoods are placed under strict lockdowns. But students at some university campuses in China’s capital city are protesting against the harsh measures, demanding administrators to allow them to return home.

Since April 22, the number of infection cases from the omicron variant has increased from six to 99 on May 22, according to Chinese media. There have not been any deaths reported so far. Due to Chinese authorities’ past record of underreporting infections and covering up information, it is difficult to assess the true scale of the current outbreak.

On May 21, Beijing’s Haidian District, where many universities are located, announced a week-long lockdown.

Videos have been circulating online that show students protesting at Beijing Normal University on the eve of May 24. One video shows the BNU students gathering outside the gymnasium and meeting with the school officials.

Students wrote on social media that despite in-person classes being canceled on campus, students are not allowed to go home. Many are worried that they won’t be able to return home if the number of COVID infections continues to climb.

BNU students published a notice online to call for the students to gather outside the school gym at 8 p.m. on May 24. The message reads, “BNUers Unite” and “#BNU Let Me Go Home,” laying out four demands to the university’s administration: provide information on the dates and format of the final exams; provide dates for the summer break and confirm whether students can go home; respond to students’ demands transparently, and do not retaliate against students who participated in the protests.

The bottom of the poster reads, “Whether you are a silent bystander or an outspoken individual, your support counts as long as you show up.”

Later that night, around 10:40 p.m., a student posted on WeChat that the BNU administration told the students that they could apply for permission to go home as long as they could provide documentation or “permission to return” from their parents and local authorities of their hometowns.

It is unclear if the “permission to return” is an official document, and no further details were provided on how the students can obtain it.

On May 23, students at the China University of Political Science and Law staged a protest. They had circulated a notice online, asking students to gather at 8 p.m. in front of the main building on campus and play the song “Do you hear the people sing”—the same music used during the pro-democracy protests in Hong Kong in 2019 and 2020.

The notice listed five demands similar to those of Beijing Normal University.

The next day, on May 24, the university responded with a statement, allowing students to return home. The notice, titled “Reminders On Returning Home During Campus Lockdown,” asked the students to observe the rules of Beijing municipality and those of their hometowns during their return and not come back to campus until further notice.

The earliest protest in Beijing known to the public took place on the eve of May 15 by students at Peking University. They removed the barrier wall that was set up on campus the day before.

As the news about the protests broke out, some China observers noted that they coincided with the upcoming anniversary of the June Fourth incident or Tiananmen Square massacre.

Former BNU professor Li Yuanhua told the Chinese language edition of The Epoch Times on May 25 that “the university officials are certainly very nervous and sensitive about June Fourth, but most students do not know about the incident. Also, the students did not mention June Fourth in their demands.” Regardless, Li said, university campuses are now highly volatile due to the lockdowns.

The Chinese youth are ignorant about the June Fourth incident because it is heavily censored by the ruling Chinese Communist Party. The CCP continues to deny it ordered the military to break up the student-led pro-democracy rallies and open fire on civilians at Tiananmen Square on June 4, 1989. The actual death count, though kept as a top secret by the CCP, was at least 10,000, according to a secret UK diplomatic report. Textbooks in China do not mention the event, and discussion of the topic is scrubbed online.

Li also said that the students’ demands are very reasonable but that the university officials might not be able to make the decisions themselves because the situation is related to travel restrictions under the Chinese regime’s “zero-COVID” policy. Other regions could be reluctant to allow people from Beijing to enter due to the growing number of COVID cases in China’s capital city. He added that high-level officials at the Ministry of Education might have to step in and make the final decision on students’ demands.