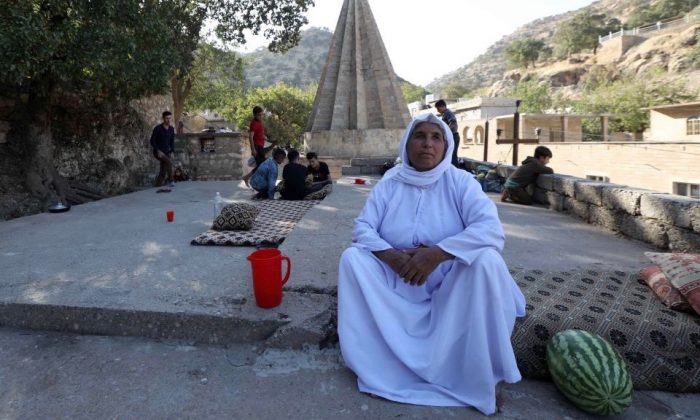 An Iraqi Yazidi woman is pictured at Lalish temple in a valley near Dohuk, northwest of Baghdad, on October 5, 2018. (Safin Hamed/AFP/Getty Images)
International

University Professor Gets Student Rescued Out of ISIS Stronghold

A Swedish university professor coordinated the rescue of an Iraqi student and his family from the clutches of ISIS.

The rescue mission involved the school hiring armed mercenaries to find Firas Jumaah, a doctoral student at Lund University. Jumaah left the school and returned home in 2014 after his wife told him their town was being surrounded by ISIS terrorists, according to Fox News.

“My wife was totally panicking. Everyone was shocked at how IS were behaving,” said Jumaah, reported The Local. “I took the first plane there to be with them. What sort of life would I have if anything had happened to them there?”

Jumaah entered the warzone and put himself in danger to be with his family. His wife told him that ISIS had killed all the men and enslaved all the women in the next village.

It didn’t help the situation that Jumaah and his family are part of the Yazidi ethnic group, a people that ISIS routinely targeted for cruelty.

“I had no hope then at all,” Jumaah told the university magazine LUM, via The Local. “I was desperate. I just wanted to tell my supervisor what was happening. I had no idea that a professor would be able to do anything for us.”

So when this mentor said to her mentee: "you can count on me", she meant it 😱! Amazing story of a mentor (Lund University) that set off a mission to rescue her mentee & family from ISIS in Iraq. @nature @NatureNews https://t.co/Mk2V8edYuR pic.twitter.com/B4uXLMkG6u

Chemistry professor Charlotta Turner received a text message from Jumaah stating that he might not be able to return to class to finish his thesis and get his Ph.D.

“What was happening was completely unacceptable,” Turner said. ”I got so angry that IS was pushing itself into our world, exposing my doctoral student and his family to this, and disrupting the research.”

Jumaah and his family hid in a bleach factory that wasn’t in operation, and they often heard gunshots from outside, The Local reported.

The University Springs into Action

Turner contacted the school’s head of security at the time, Per Gustafson.

“It was almost as if he’d been waiting for this kind of mission,” Turner told LUM. “Per Gustafson said that we had a transport and security deal which stretched over the whole world.”

Gustafson hired a private security outfit who took on the mission with four armed mercenaries and two Landcruisers.

“It was a unique event. As far as I know, no other university has ever been involved in anything like it,” Gustafson said.

The security team rushed Jumaah and his wife out of danger and sped them to an airport in Iraqi Kurdistan.

Despite getting back to Sweden to finish his studies and being brought to safety, Jumaah still had worries.

“I have never felt so privileged, so VIP,” Jumaah said. “But at the same time I felt like a coward as I left my mother and sisters behind me.”

According to LUM, the family Jumaah left behind survived and ultimately outlasted the ISIS presence. Kurdish forces backed by the West decimated ISIS in the area.

Jumaah was able to get his Ph.D., and currently works at a pharmaceutical company in Sweden. The family has nearly paid back all the money owed for the mercenaries hired by the school.