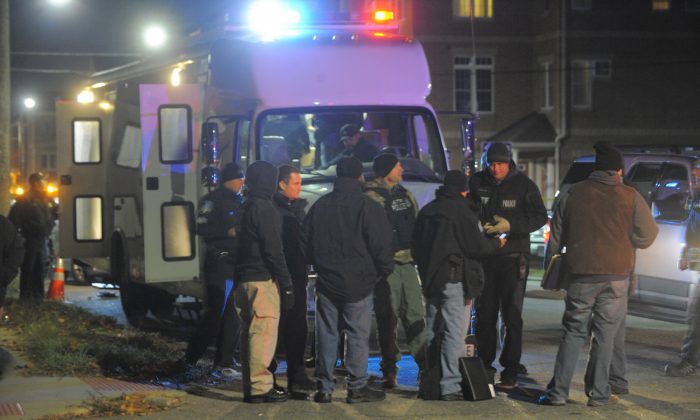 Police stand near the command center as they search for a suspect in the shooting of a Wayne State University officer in Detroit on Nov. 22, 2016. (Steve Perez/Detroit News via AP)
Crime and Incidents

The Associated Press
View profile
Follow
biggersmaller
Print
DETROIT—A police officer is in critical condition after he was shot in the head while on patrol near a university campus in Detroit, and authorities have said they are interrogating a man about the attack.
UPDATE: The officer has died, it was confirmed Wednesday.

Detroit Police Chief James Craig said Wayne State University officer Collin Rose, 29, was on duty around 6:30 p.m. Tuesday when he radioed to say he was investigating possible thefts of navigation systems from cars and SUVs and that he was about to speak to someone on a bike.

Officers who arrived on the scene found Rose injured on the ground, Craig said. He said Rose is a five-year veteran of the department who works in the canine unit.

It is with a great deal of sadness and unbearable grief that I report @WayneStatePD K9 Officer Collin Rose has passed away. #LODD #LESM pic.twitter.com/4QEydz43y9

Detroit Assistant Police Chief Steve Dolunt said “a person of interest” was in custody but that it wasn’t clear if he was the shooter. Dolunt said the officer was not shot with his own gun and that police were still looking for the weapon.

University spokesman Matt Lockwood said Wednesday morning that Rose has undergone surgery and that his parents and fiancee are by his side. Michigan highway officers gave his parents an escort so they could be with their son, Lockwood said.

Shortly after the shooting, several dozen armed officers were engaged in a manhunt in the residential area of Woodbridge, within two blocks of the campus. According to a statement posted on the university’s website, police were searching for an African-American man in his 40s with a full beard. It said he was wearing a white T-shirt with white and black lettering, a skull cap and a brown jacket.

Police arrested the person of interest without incident about three blocks from where the shooting happened, Dolunt said.

The shootings of police officers in Texas and Missouri on Sunday were the latest in what law enforcement officials say is an alarming spike in ambush-style attacks. A San Antonio detective was fatally shot, and a St. Louis officer was shot twice in the face but survived. Police officers were also shot and injured during traffic stops in Sanibel, Florida, and Gladstone, Missouri, on Sunday night, but authorities have not suggested those were targeted attacks.

One-third of police officers shot to death on the job this year were purposely targeted by their assailant, according to the National Law Enforcement Officers Memorial Fund.

Wilson said police don’t have a motive for the shooting, or “whether it was an ambush or something different.” Citing the shootings Sunday, he said: “That’s something that’s crossed our minds.”

Rose was a cadet with the New Baltimore Police Department and had his first job as an officer with the village of Richland, Lockwood said. Rose, a cyclist interested in dog training, graduated from Ferris State University in 2010 and was president of Sigma Phi Epsilon fraternity.

“That shows you his leadership right there,” Lockwood said.

Wayne State has more than 27,000 students and is located in the heart of Detroit. Wilson said the school employs around 65 officers.