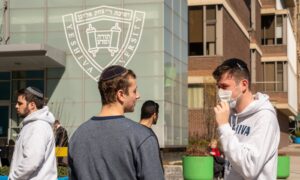 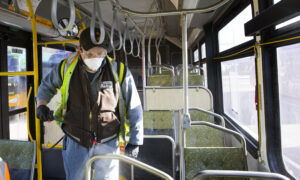 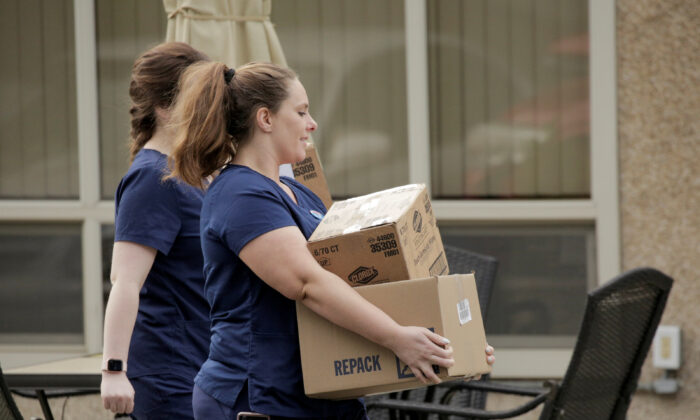 Healthcare workers carry Clorox wipes and other supplies into the Life Care Center of Kirkland, the long-term care facility linked to several confirmed coronavirus cases in the state, in Kirkland, Washington on March 5, 2020. (David Ryder/Reuters)
US News

University of Washington Moving All Classes Online Over Coronavirus Concerns

The University of Washington is moving all classes online next week due to the outbreak of the new coronavirus in the state, the hardest-hit in the nation, after the school announced that a staff member tested positive for the virus.

Seventy-nine cases have been confirmed in the state. Eleven patients have died, including 10 in King County, according to county officials.

Starting March 9, classes on all three campuses at the University of Washington will no longer be meeting in person, said university President Ana Mari Cauce in a message to staff, faculty, and other academic personnel.

The decision was made after the school consulted with public health officials about social distancing measures to try to limit the spread of the new virus, which has symptoms similar to the flu and causes a disease called COVID-19.

Teachers are being asked to conduct classes and exams remotely if possible until the current quarter ends on March 20. If classes can’t be conducted remotely then other options, including grading based on work already done, may be used, they said.

The university plans to resume normal classes when the spring quarter begins on March 30, according to the school’s website.

Carl Bergstrom, a professor of biology at the school, called the move “an excellent decision” that was “well-informed by the science and certain to help flatten the epidemic curve for COVID-19.”

He said on Twitter that other institutions should implement similar policies.

The University of Washington, which has nearly 57,000 students, appeared to be the first college in the country to shift to online classes. A number of primary schools have closed after students or staff members were either suspected of or confirmed to have the new virus, including schools in Washington, New York, and Oregon.

The university has campuses in Bothell, Tacoma, and Seattle. Most of Washington state’s cases were discovered in Kirkland, located in King County.

Geoffrey Gottlieb, interim chair of the university’s advisory committee on communicable diseases, said in a letter to the school community on March 6 that a staff member received a positive test for COVID-19. The employee, who works in Roosevelt Commons East, is in self-isolation at home.

The building, which is situated west of the university’s Seattle campus, was closed for cleaning until further notice.

The worker was last in the building on Feb. 24, 27, and 28. Everyone who came into contact with the person will now be contacted, those individuals are being asked to stay at home for two weeks and will be monitored for symptoms, said officials.

A significant number of Washington’s cases have been traced back to the Life Care Center of Kirkland, a nursing home. Earlier this week, officials said that around 50 patients and staff at home are being tested for the new virus.

The new virus emerged in China late last year and has spread to about 60 countries across the world. The origins of the virus—which spreads primarily through the respiratory droplets produced when an infected person sneezes or coughs—still aren’t confirmed.

Sick people should stay home and call their doctor or health authorities.