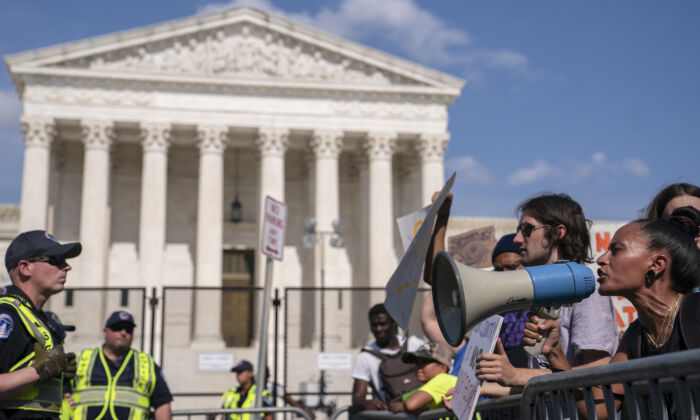 A federal lawsuit in Washington alleges the University of Oregon is imposing an ideological litmus test for hiring and promotions. File photo taken on June 26, 2022. (Nathan Howard/Getty Images)
US

The University of Oregon (UO) is under fire from two free speech advocacy groups, who claim it is infringing on freedom of speech and expression.

The university’s Division of Equity and Inclusion is being sued for blocking a critic on Twitter, even as the institution is being pressured to stop imposing an ideological litmus test for hiring and promotions.

With support from the Washington-based Institute for Free Speech, Portland State University professor of political science Bruce Gilley filed a federal lawsuit on Aug. 11 against Tova Stabin, an officer in the University of Oregon’s Division of Equity and Inclusion, for blocking him from the division’s official Twitter account.

Gilley had posted a message from @UOEquity promoting a “Racism Interrupter” and added his own comment that “all men are created equal.”

That earned a block from the account’s manager.

“Nothing could better illustrate the problems with diversity ideology than a state university that bans a member of the public for quoting our Declaration of Independence. This lawsuit is necessary to defend our freedom of speech and the rule of law,” Professor Gilley stated through counsel.

Gilley is an outspoken critic of Critical Race Theory and what he sees as the ideological indoctrination of students.

“Stabin blocked him from the Equity Division’s Twitter account, because he promotes a colorblind viewpoint with which she, and her employer, disagree,” the lawsuit reads.

In its five-year strategic framework, released in May 2021, the University of Oregon listed DEI as one of its top five priorities.

“We are committed to the principles of equity, inclusion, and diversity in everything we do,” the framework stated.

“Apparently, the state’s flagship university has a concept of inclusion that does not include tolerance for differing viewpoints,” wrote Del Kolde, senior attorney at the Institute for Free Speech.

“That Professor Gilley was silenced and censored by the university’s so-called Division of Equity and Inclusion for simply quoting the founding document of our nation makes it pretty clear that the university is no longer committed to the inclusion or diversity of viewpoints,” said D. Angus Lee of Angus Lee Law Firm.

“The First Amendment does not allow the government or its actors to ban individuals from public forums just because they disagree with the views those individuals express,” he adds.

The lawsuit asks the judge to order @UOEquity to unblock Prof. Gilley and to issue a permanent injunction preventing the account’s manager and agents from discriminating on the basis of viewpoint when blocking users in the future.

A spokesperson said the university does not comment on active litigation.

Meanwhile, the university is taking heat for requiring current and prospective faculty members to submit statements discussing their contributions to DEI to be eligible for hiring, promotion, and tenure, according to the Foundation for Individual Rights and Expression (FIRE).

On Aug. 11, 2022, FIRE wrote to UO president Michael Schill asserting that these requirements threaten academic freedom by interfering with faculty members’ scholarly autonomy and compelling them to endorse views they may not actually hold, in violation of the First Amendment and UO’s own policies.

“These policies—including the guidelines and rubrics used to evaluate the DEI statements—require faculty to affirm UO’s views on DEI and to promote these views in their respective classrooms, research initiatives, and service activities, to avoid being disadvantaged in hiring or evaluation,” wrote FIRE’s campus rights advocate Aaron Terr.

The university asks faculty search committees to use a rubric to guide its evaluation of an applicant’s DEI statements.

A candidate who “only mentions activities that are already expected of faculty,” such as “I always invite students of all backgrounds to participate in my research lab,” would receive a low score according to the rubric.

High scores would accrue to a candidate who “discusses DEI as core values that every faculty member should actively contribute to advancing” and “intends to be a strong advocate for DEI in their field.”

But the First Amendment prohibits the university from requiring faculty to demonstrate a commitment to prescribed ideological views, according to FIRE.

“UO should judge faculty based on the quality of their economic work, not their degree of conformity to certain ideological tenets.”

FIRE called on the university to eliminate or revise these requirements.

The University of Oregon did not respond to multiple requests for comment from either FIRE or The Epoch Times.

Last year, FIRE ranked University of Oregon 59th out of 159 universities and colleges nationwide in a review of free speech on campus.