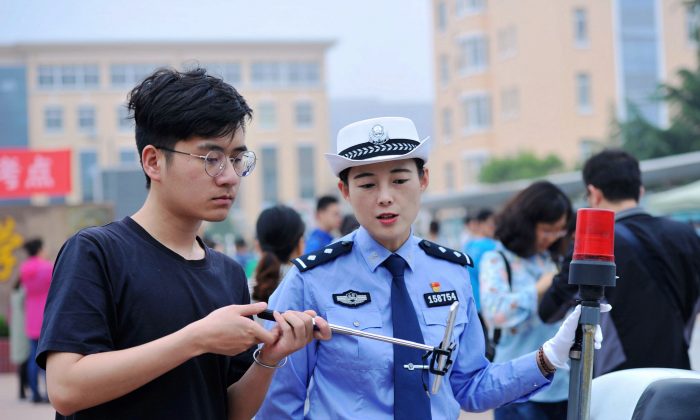 A traffic police officer (R) uses a smartphone to report during a live broadcasting outside a school at the first day of the 2018 college entrance exam of China, or the "Gaokao", in Qingdao in China's eastern Shandong province on June 7, 2018. (AFP/Getty Images)
China

A university in Guangxi Province in southern China issued a document mandating the thorough inspection of mobile phones, computers, and drives belonging to all teachers, staff, and students at the university.

Radio Free Asia (RFA) reported that it received a document about the inspection from an insider of Guilin University of Electronic Technology, a state university, located in Guangxi’s provincial capital. The document said the inspection would last for half a month from Nov. 7 to Nov. 23, and apply to all electronic devices of the more than 40,000 students and staff at the university . The document required everyone to undergo the inspection.

The screenshot of the document was widely circulated online. “Recently, domestic and foreign hostile forces spread banned and illegal videos through the internet and mobile phones,” said the document, which was issued on Nov. 6.

“In order to resist and defeat the spread of harmful thoughts such as violence, terrorism, reaction, obscenity, etc, the entire school will undergo investigation in accordance with university regulations,” so the document. “All units and colleges should conduct a comprehensive investigation of the mobile phones, computers, mobile hard drives, and USB flash drives of all faculty, staff, and students.”

The Nov. 13 RFA report said that a staff member of the university confirmed the existence of the document.

“Such requirements are issued by higher authorities to be implemented in all schools.” The staff member also said that the national and public security services can monitor teachers’ and students’ phones and other electronics, so they would take care of any undesirable content.

The Chinese Communist Party (CCP) has continuously increased its surveillance over the Chinese people. In Xinjiang, part of China’s far west, the authorities use a roadside device on the road to check passersby’ phones for banned content.

On Aug. 14, Reuters reported that a man from Beijing was stopped by police when he was travelling in Xinjiang. The police took his iPhone and connected it to a device to search it. Such surveillance devices, first introduced in Xinjiang, are being approved for police use across the country.

On Aug. 16, Hu Ping, the famous editor-in-chief of “Beijing Spring,” told NTD Television that while there is still some dissent circulating in the Chinese internet, the CCP has successfully blocked and silenced the voice of a large part of the population by constantly upgrading its censorship technology.