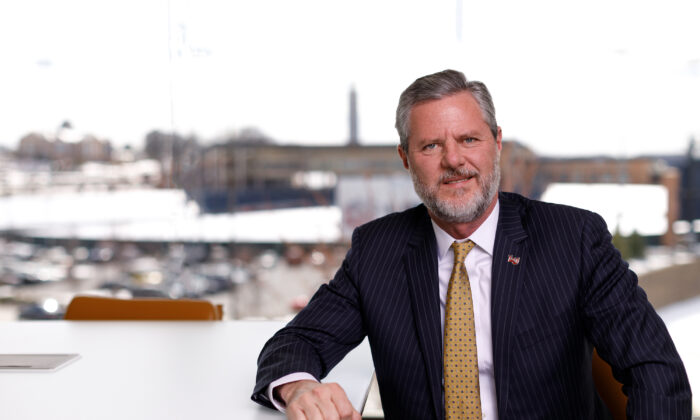 Liberty University, a private Christian university in Lynchburg, Virginia, has launched a new think tank that it says will push back against the left’s efforts to turn young people and Christians into socialists by misrepresenting the Bible and U.S. Constitution.

The school, which describes itself as “a Christian academic community in the tradition of evangelical institutions of higher education,” created the Falkirk Center for Faith & Liberty to go on the offensive against efforts to dilute the Judeo-Christian values found in the Bible and Constitution by those on the left seeking to promote ever-expanding government.

“The goal is to educate the public, especially the younger generation, on the fundamentals of American government, and what our founders were trying to accomplish,” Liberty President Jerry Falwell Jr. told The Epoch Times.

“We feel like the public schools in the last few decades and the mainline universities have either not taught American history at all or they’ve revised it to the point that it ignores the exceptionalism of the American experiment and emphasizes only the negative things that were part of our history.”

“We just don’t want to see some of the disasters that have happened in history with communism and fascism and slavery, all the things that came out of the old world, to ever happen here.”

Falkirk was co-founded by Falwell and Turning Point USA founder Charlie Kirk, two ardent defenders of President Donald Trump, who appreciate his aggressive style. Falwell credits Kirk with coming up with the idea of creating the center.

The launch took place on Nov. 30 in Lynchburg and was attended by more than 60 Christian leaders and influencers from across the nation.

The Falkirk Center will operate as a wholly-owned subsidiary of Liberty University. Falkirk’s mission will be to “equip courageous champions to proclaim the Truth of Jesus Christ, to advance His Kingdom, and renew American ideals.”

According to the university, the Falkirk Center is needed to combat the “powerful voices and institutions [that] are increasingly seeking to eliminate Judeo-Christian principles from American culture and society.”

“The news media, elected officials, academic institutions, and special interest groups have used their platforms to deny America’s legacy of foundational Judeo-Christian principles and replace them with the creeds of secularism, influencing upcoming generations of Americans at alarming rates.”

The center plans to “use a diverse variety of advocates and media strategies to promote the core beliefs of America’s Founders in limited government, free enterprise, individual rights and liberties endowed by our Creator, and their deliberate and intentional creation of a republic and not a theocracy.”

Falwell said it’s wrong for the left to use Christianity to advance their policy goals.

“When people like [House Speaker] Nancy Pelosi and [Democratic presidential candidate] Pete Buttigieg say it’s un-Christian not to have open borders or socialism, I think they’re perverting the Gospel.”

“When you hear somebody like [former Ohio Gov.] John Kasich use the Gospel for socialistic programs, it’s just to show that he has a basic misunderstanding of the Gospel.”

Kirk told The Washington Examiner the Falkirk Center hopes to answer a question often posed to him: “Was Jesus Christ a socialist?”

“The fastest-growing religion in America is atheism and secularism, and with that is the rise of leftism and statism, and, as people veer away from the church and veer away from the Judeo-Christian values that built our country, people are more likely to embrace statism,” Kirk said.

Jesus, Falwell told The Epoch Times, “told us as individuals to help the poor; he never told us to vote for somebody who was going to take money from our neighbors and give it to the poor. So Jesus, in my opinion, was apolitical.”

“We think it’s a distortion of the teachings of Jesus by the left to suggest that he was a socialist,” Falwell said.