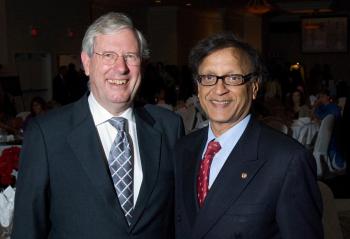 Joan Delaney
Senior Editor, Canadian Edition
Joan Delaney is Senior Editor of the Canadian edition of The Epoch Times based in Toronto. She has been with The Epoch Times in various roles since 2004.
View profile
Follow
biggersmaller
Print
The buzz in B.C. these days is India, and Simon Fraser University's grand Diwali Gala at the Bollywood Banquet Hall last Monday brought together hundreds of business and community leaders interested in furthering their connections with the populous South Asian country.

An effort to promote and build awareness of Indian culture, the gala was just one of the many aspects of SFU's ongoing role in forging academic and research-based collaborations and exchanges with India.

Diwali, which symbolizes "light over dark, good over evil, and knowledge over ignorance," could well describe SFU's India Country Strategy, a wide-ranging initiative established in 2006 that focuses on building community and partnerships between B.C. and India.

On a trip to India with Premier Gordon Campbell last December along with 35 other educators, SFU president Dr. Michael Stevenson signed three Memoranda of Understanding with Indian institutions in the area of education and public health.

One of these agreements is with the Public Health Foundation of India (PHFI), an organization that is developing seven Indian Institutes of Public Health. Boosted by $50 million from the Bill Gates Foundation, the PHFI is partnering with universities worldwide to train future faculty for the seven public health institutes.

SFU is the first Canadian university to become involved in this project, which will enable SFU public health students get practical training and also help India produce research pioneers and professionals in public health.

“It’s been major a strategic priority at SFU to develop the health sciences with a focus on public and population health, and with a global health focus,” Stevenson said in an interview with The Epoch Times.

“So we have a new faculty of health sciences which has undergraduate and graduate programs in population health and a master's degree program in global health, and it obviously follows that in relation to India we would be very interested.”

The other agreements include collaborating with institutions in the area of infectious diseases such as malaria and tuberculosis, and a “village life improvement project,” the product of a partnership between SFU and the Indo-Canadian Friendship Society of B.C. together with the Village Life Improvement Foundation in Chandigarh, India.

“If the Indians can get partners in other countries to put money where their mouth is, they will match it providing it's on very solid basis in the sense of the institutions that are going to be involved. But I think it is very clear that we’re not dealing with the foreign aid one-way transfer here — these are genuine collaborations, including in the financing,” said Stevenson.

Last March, SFU also began a program in which students graduating from high schools in India and accepted into undergraduate programs at SFU for the fall 2008 semester can apply for a scholarship worth $10,000.

The provincial government, too, has been forming partnerships and building trade ties with India, and is currently in the process of establishing three trade offices in Delhi, Mombai and Bangalore.

Stevenson said SFU is hoping to be part of a joint initiative announced in June by Campbell at the India Calling 2008 conference in which B.C. and India  will provide $1 million each to support research, development, and commercialization in life sciences and environmental technologies.

The agreement aims to support key economic sectors such as forestry, health, bio-energy and agriculture. The funding will enable B.C. and India to work together to increase the economic, social and environmental benefits that can be realized from a strong life sciences sector.

Randall Martin, executive director of the B.C. Center for International Education, said a study by the government's Asia Pacific initiative identified India as one of the five key markets for the province and recommended “a very broad engagement with India” as a new growing geopolitical economic power.

With its hub of major ports, airports, roadways and railways, B.C. is considered North America's natural gateway to the burgeoning economies of the Asia-Pacific. But B.C. is not the only one to recognize India's potential.

“India is being courted right now by a number of countries,” said Martin. “It's the emerging political giant. I know France, Germany, Italy, the US , Australia — everybody is in there. It’s got huge activity there,” said Martin.

By looking at science, health, the arts, and the movement of faculty, staff, and students between both countries as well as its engagement with the local Indo-Canadian community, SFU's India strategy is “broad and very well thought out,” said Martin.

“The model that they're using is actually a model that I think will be emulated across the country in terms of a strategic engagement with India.”

Stevenson said the strategy is simply indicative of the university's history in spearheading bold initiatives, such as  establishing a campus in the Downtown Eastside, Vancouver's poorest and most crime-ridden area.

“I think [the India Country Strategy] is just typical of the way that SFU reaches out, embraces opportunities to do innovative things educationally but in response to communities that have not been well linked to the higher education institutions.”

Stevenson's next trip to India, along with vice-president, research, Mario Pinto, will be for the Federation of Indian Chambers of Commerce and Industry's Higher Education Summit 2008 on November 25 and 26  in New Delhi.

About 500 delegates from around the world will attend the Summit, for which Canada is the “Partner Country.” More than 40 Canadian institutions are participating in the event.