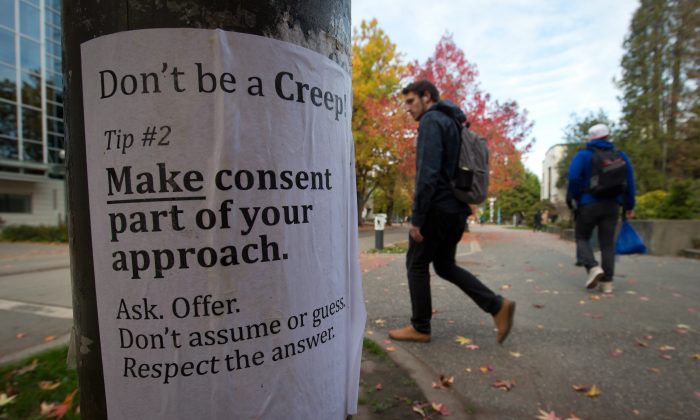 University of British Columbia students walk past a sexual assault poster on campus on October 30, 2013. The RCMP is investigating six sex assaults that occurred at UBC since April. (The Canadian Press/Darryl Dyck)
Canada

University Doing All It Can To Keep Students Safe, Says UBC President

VANCOUVER—Six sex assaults at the University of British Columbia have resulted in an unprecedented police presence on the campus where fear has spread among students, staff, and the community, says the facility’s president.

Stephen Toope told a news conference Wednesday that unlike many other inner-city universities, UBC is situated on a large amount of open space, requiring a different type of response to give people a sense of security.

An outside security company has been hired to bolster the university’s own resources as volunteers have stepped in to patrol the campus, Toope said, adding that millions of dollars have been committed to upgrade lighting in the last two years and that major corridors have been relit.

“At the same time the RCMP has increased dramatically their patrols on campus and we’re working very much in collaboration. There is far more police presence on campus than ever in the history of the campus,” he said.

“We are putting the resources that are necessary to keep the campus as safe as it possibly (can be). Frankly, we are not counting our pennies at this moment.”

The RCMP said Tuesday they believe the same man is responsible for six attacks—three more than previously reported.

Sgt. Peter Thiessen said the attacks may date back to April, with incidents following in May, then September, and three in October. The most recent attack was reported to police on Oct. 27.

“A young woman indicated that she was walking alone . . . shortly before 1:30 in the morning when she noticed a shadow behind her,” Thiessen said. “She was grabbed from behind and she began to flail her arms, causing the suspect to run away.”

In an incident on Oct. 19, the man grabbed the woman from behind, ripped her nylons and punched her in the face, giving her a black eye. It represented an escalation in violence and prompted the RCMP’s Major Crimes Unit to take over the investigation.

In all cases, the suspect is described as a Caucasian male with an olive or tanned skin tone. He is in his mid 20s to early 30s with dark hair, a thin build, and about six feet tall, Thiessen said.

Thiessen said police have added more resources to the manhunt, and are also working with the Vancouver Police Department.

However, he urged women to look out for themselves by walking in pairs or groups, being aware of their surroundings, taking routes that are well lit, and letting friends know when they are arriving and what route they are taking.

“These attacks seem to be crimes of opportunity, where the suspect is specifically targeting lone females in somewhat secluded areas,” he noted.

Toope said a campus security group will report back in a month with suggestions on whether security cameras should be installed but that issue raises privacy concerns and will require careful consideration.

Toope made his comments about the assaults just weeks after a scandal erupted over a frosh-week rape chant involving the Sauder School of Business.