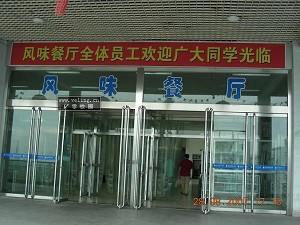 On October 13, several mainland university students revealed to The Epoch Times that 39 students in Yanshan University, Hebei Province, suffered from food poisoning on September 8, 2007, and one allegedly died. The University tried to conceal the incident; no media reported on the incident. Articles posted on the university's Internet forum were deleted.

On September 13, many students boycotted the university dinning hall in protest against the incident. An informer whose friends were poisoned told The Epoch Times, “That night, all those students who ate the noodle salad from the stall at the east end of the dinning hall had high fever, vomiting and diarrhea.” Several students at the university confirmed that there were indeed over thirty students suffering from food poisoning that night.

On the afternoon of October 13, 2007, The Epoch Times interviewed one of the students who had had food poisoning. He said, “I really don't know the latest situation. I asked the school but was told there were no results yet.” This student mentioned that most of the students left the hospital by October 11 except for several who were really sick.

Students also told The Epoch Times that a local reporter had tried to visit the sick students in the People's Hospital but was stopped by university staff. A person who worked at the hospital told the reporter that some of the students have been in coma for two days already but they were fine after emergency rescue.

According to the students, sanitary problems with the dinning hall have long existed. The hygiene was bad and the place was untidy. Flies and cockroaches were everywhere and the food prices were high and still rising. A student told The Epoch Times, “The university's logistics department is in charge of the dining hall but never bother to understand and solve the problems. After something went wrong, the university not only refused to resolve it but also tried to conceal the truth.”