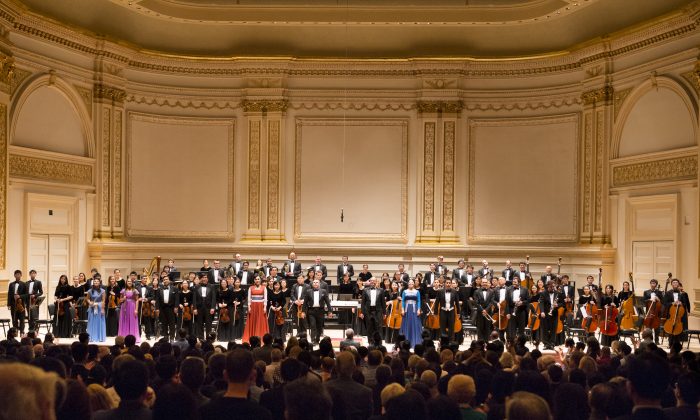 “They had a wonderful time,” Mr. Mourton said of his students’ experience. “It was a great blending of Eastern and Western music; it was beautiful.”

The Shen Yun Symphony Orchestra is the world’s only orchestra that permanently combines both classical Western and Chinese instruments. Included are the erhu, known as a Chinese violin, and the pipa, known as the Chinese lute.

“Shen Yun is further unique in that its repertoire draws upon five millennia of history, with an array of legends, regions, and peoples from which to find inspiration, reviving themes and melodies from ancient times,” according to the company’s website.

“Many of the instruments I heard before, but had never seen live, such as the pipa and the erhu—so it was interesting seeing those instruments live, and they’re such beautiful sounding instruments,” he said.

Being a string instrument player himself, Mr. Mourton said he was particularly impressed by the precision of the violins.

“Everyone was such a wonderfully trained string player. I play the bass myself actually, so I could really appreciate all the hard work they put into it,” he said.

Mr. Mourton also praised the conductors for leading an orchestra that combines both Western and Eastern instruments, and vocalists as well.

“I was very impressed how the orchestra was able to pull back and let [the vocalists] sing when it was their turn,” he said.

“I know it’s very hard sometimes, being an orchestra musician myself, to have that balance, so the conductors did a very nice job whenever it was the traditional instrument’s turn to play, you could really hear them. It was very nice.”

The four encore presentations, demanded by an ecstatic audience that gave extensive standing ovations, also stood out for Mr. Mourton.

“I found the encore numbers particularly very good. I mean they were just so precise. It was very well done.”

For the 40 Fairleigh Dickinson students, coming to the concert on Saturday was part of a school program titled Sands of Time which provides students with out of classroom leadership and character building experience, exploring topics such as music, history, literature, and museums.

“This was definitely a highlight of our season so far,” Mr. Mourton said about attending the concert on Saturday night as part of the program.

“It was great to bring 40 young people here to this concert for them to hear the music tonight.”

Mr. Mourton added that he would like to bring more students to the Shen Yun performance, next time perhaps to the classical Chinese dance presentation provided by Shen Yun Performing Arts.

This year, the orchestra is on a seven-city tour across the United States, providing audiences the opportunity to enjoy Shen Yun’s original music as well as a few masterpieces of the Western classical tradition.