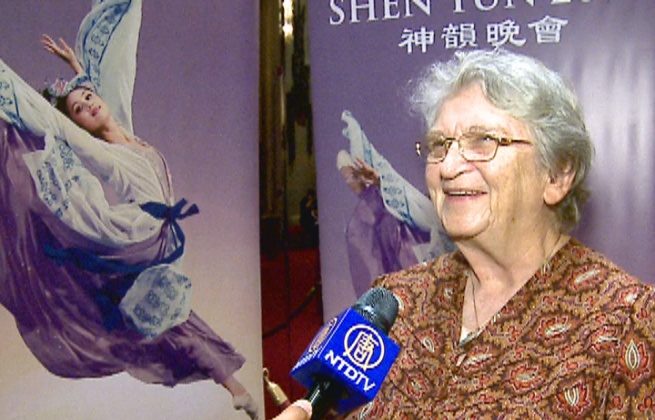 Ms. Joan Chatfield, former Dean of Humanities and Fine Arts at the Chaminade University of Honolulu, came back to see Shen Yun again after first attending the performance in 2012. (Courtesy of NTD Television)
News

“I’m very happy. I’m happy because I think this is an opportunity for those who aren’t exposed to the Chinese culture to have a better feel,” said Ms. Chatfield, former dean of Humanities and Fine Arts at the Chaminade University of Honolulu. “That’s all we’re trying to do, always, is get more and more people to understand each other.”

“This is a performance that takes very disciplined and exceptional dancers, and … really presents what they want to say so magnificently,” Ms. Chatfield added.

Ms. Chatfield appreciated New York-based Shen Yun’s mission to revive 5,000 years of Chinese civilization and the traditional Chinese culture. She said she’d seen the performance last year not knowing anything about it and had to come back.

“I think we are privileged always to be able to get an insight into another culture. That’s just how it is,” Ms. Chatfield said.

Ms. Chatfield said that with her background in fine arts, the art and culture presented by Shen Yun made for a perfect match.

“The costumes are just magnificent … the colors are gorgeous, [and] the flowing material,” Ms. Chatfield observed. “The image that the eye gets is one of such balance.”

In Shen Yun’s costumes, the dancers portrayed everything from emperors to warriors to celestial beings, and stories were told through classical Chinese dance, which Ms. Chatfield found intriguing.

“It’s such a balance of the way they play off each other. It’s so disciplined, my gracious! It’s a lot of work to put on something like that,” she said, noticing the nuances in the choreography.

Ms. Chatfield said she came from a family of actors as well, “so I’m very pleased always that the stage is used as an avenue for education, because it’s really fine, it’s really fine.”

Shen Yun Performing Arts is performing at the Neal S. Blaisdell Center through May 5.