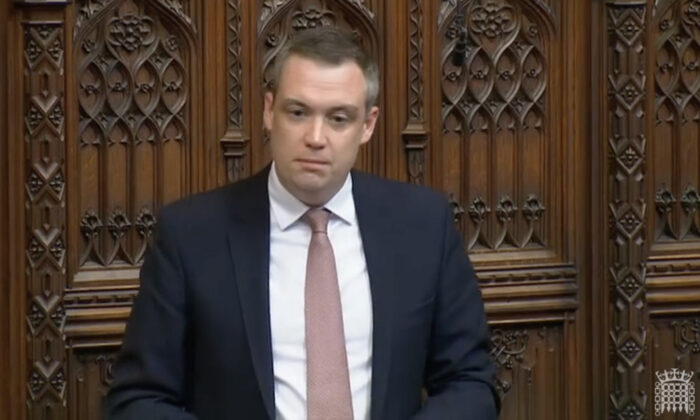 Lord Wharton of Yarm speaks in the House of Lords in London on July 1, 2021. (House of Lords/Screenshot/The Epoch Times)
UK

Universities must meet their obligations to uphold free speech and academic freedom, the UK’s higher education regulator said on Oct. 31, days after a professor resigned following dissension with transgender activists.

James Wharton, chairman of the Office for Students (OfS), said the office requires universities to have mechanisms in place to protect these freedoms and to apply them in practice.

He also said the OfS is “working closely with the government” on the Higher Education (Freedom of Speech) Bill, which will put more legal duties on universities and colleges to protect free speech on campuses.

Writing in The Telegraph on Oct. 31, Wharton stressed that respectful debate is an “essential life skill” that students will need before stepping into the wider world, where they’ll be confronted with “ideas and philosophies that they are uncomfortable with, [or] even offended by.”

“Students attending our universities should have their understanding of the world around them stretched, and their horizons broadened—in short, they attend university to learn,” he wrote.

Wharton said that despite the fact that freedom of speech does “throw up difficult issues” at times, “it is where debate is most contentious that it is most important these freedoms are defended.”

The OfS chair told universities that students are “entitled” to be exposed to academics who can freely express a range of views, “no matter how controversial they may be.”

He also said it’s “vital” to protect academics from harassment “both on and off campus” if the UK wishes to remain a world leader in research, as the ability to develop knowledge “depends on the free exchange of ideas, underpinned by a culture of robust debate and unrestricted enquiry.”

“Academics cannot be expected to engage fully with their disciplines if they fear complaints that could effectively end their careers. They must be protected to ask difficult questions,” Wharton said.

The caution to universities comes three days after philosophy professor Kathleen Stock resigned from the University of Sussex as a result of being targeted by transgender activists.

The gender-critical feminist professor has been targeted since 2018, when she said that while “most trans people are law-abiding and wouldn’t dream of harming anyone,” transgender women shouldn’t be in spaces such as female changing rooms “in a completely unrestricted way” because many of them “are still males with male genitalia” and “are sexually attracted to females.”

Earlier in October, an anonymous group of activists campaigned to get Stock fired, calling her “one of this wretched island’s most prominent transphobes.” While university leadership issued a number of statements defending Stock, she said a statement from her former union that took the opposite side “effectively ended” her career at the university.