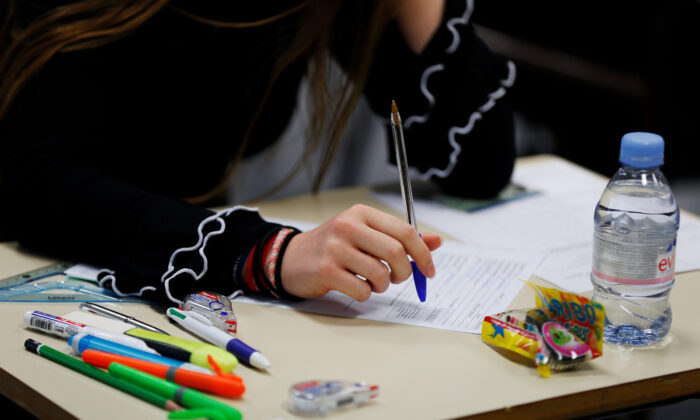 A student before an exam in Normandy, France, on June 18, 2018. (Charly Triballeau/AFP via Getty Images)
UK

The UK’s higher education regulator told universities they must not disregard poor spelling, punctuation, and grammar as it risks undermining the quality of students’ education and devaluing their qualifications.

The Office for Students (OfS) published a report (pdf) on Thursday after conducting a review of student assessment policies and practices in a small number of higher education providers. The report said some common themes behind the practices have raised regulatory concerns.

The report listed case studies of five higher education providers, two of which have incorporated technical proficiency in written English into their assessment policies and clearly communicated their expectations to students.

The other three providers do not assess students’ work on technical aspects of their written language in most cases, unless it’s a learning outcome for a module or course, or it’s stipulated by a professional, statutory, or regulatory body or a quality assurance agency for higher education.

The OfS said these approaches are “unlikely to preserve a rigorous approach to assessment,” may have contributed to inflated grades, and could result in students being disadvantaged in further studies or employment.

According to the report, providers often explained their approach by reference to a desire to achieve or promote inclusivity, which was generally defined “in terms of avoiding or preventing students being placed at a disadvantage (or advantage) by the assessment methods used.”

The OfS said it takes the view that compliance with the Equality Act and other legislation does not justify removing assessment of written proficiency in English for all students.

“Quality and standards must not be compromised: under the OfS’s current regulatory requirements, we would expect providers to assess spelling, punctuation, and grammar for most students and courses,” the report reads.

The OfS said it’s concerned that the disregard of poor writing may be widespread across the sector. It also said the practice may have contributed to the unexplained grade inflation found in its earlier analysis.

OfS Director of Regulation Susan Lapworth said students’ written work “must be of a high standard, with correct spelling, punctuation, and grammar” because it would otherwise be impossible to “analyse and explore complex theories and arguments.”

She also rebutted the argument that it’s more inclusive to ignore poor spelling, punctuation, and grammar.

“The idea that they should expect less from certain groups of students is patronising,” Lapworth said. “It threatens to undermine standards as well as public confidence in the value of a degree. It risks placing new graduates at a disadvantage in the labour market, and could leave employers spending time and money training graduates in basic written English.”

“Rigour and standards matter at all stages of education, and the fundamentals of good spelling, punctuation, and grammar are as important today as they ever were,” she said.

Donelan said the government is “determined to drive up standards at universities.”

The OfS review was launched after media outlets reported in April that a number of universities had adopted policies to ignore technical proficiency in English, with one university arguing that “constructing an academic voice means adopting a homogenous North European, white, male, elite mode of expression dependent on a high level of technical proficiency in written and spoken English, a mode of expression that obscures the students’ particularity.”