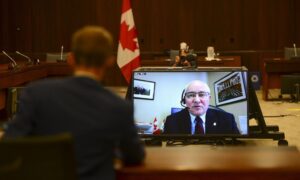 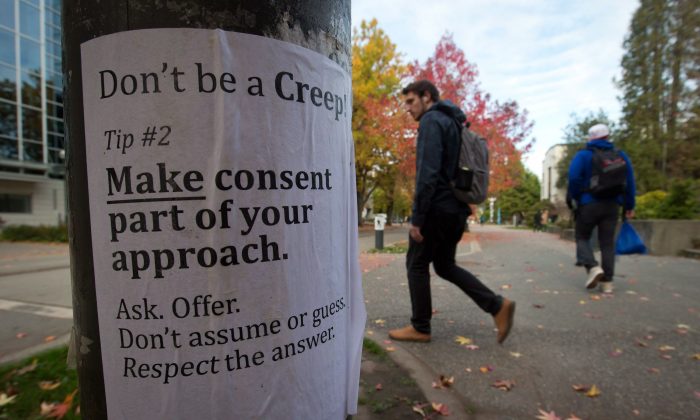 University of British Columbia students walk past a sexual assault poster on the campus in Vancouver on Oct. 30, 2013. (The Canadian Press/Darryl Dyck)
Canada

VANCOUVER—Accusations that the University of Victoria and Brock University warned women to stay quiet about alleged sexual misconduct reveal the balancing act post-secondary schools face between the rights of the accused and accuser, experts say.

One employment lawyer said there are good reasons to keep an investigation private while it is underway because the accused deserves a presumption of innocence and the university must try to maintain a “clean” probe without publicly sharing evidence.

But Richard Johnson of Kent Employment Law said under Section 25 of British Columbia’s Freedom of Information and Protection of Privacy Act, institutions have an obligation to disclose allegations if there is a threat to public safety.

“If the evidence clearly points to there being more people who are affected or there’s an ongoing threat, yes, they must disclose,” he said.

Another employment lawyer said that while universities have legal reasons to keep investigations private, there might be other factors affecting how the cases are handled.

“The more salacious details that come out with respect to incidents like this, the more universities fear those details being in the media and, quite honestly, harming their bottom line,” said Kristen Pennington of Grosman, Grosman, and Gale. “The path of least resistance is to put pressure on complainants to keep this information quiet.”

Separate incidents at the two schools have drawn new scrutiny into how universities respond to allegations of sexual harassment and assault.

The path of least resistance is to put pressure on complainants to keep this information quiet.
— Kristen Pennington ,  Grosman, Grosman and Gale

The universities have denied telling the women in each case not to speak about the results of investigations into their complaints.

At the University of Victoria, a student who asked not to be named told The Canadian Press that the school hired an independent investigator after she alleged she was sexually assaulted.

Later, administrators told her some action had been taken including requiring the man to move off campus.

But she said she had to request the investigator’s report. When a redacted copy arrived weeks later, she said it was only then that she learned the investigation had concluded she had not been assaulted.

Pennington said universities are governed by provincial privacy legislation that requires them to protect identities of third parties including witnesses, which is why redactions may be necessary.

“There is still some uncertainty in the law,” she said. “We know what a student is not entitled to at the end, which is information that is protected under FIPPA. But what we don’t have yet, really, is anything saying affirmatively what a complainant is entitled to.”

Complainants are entitled to know the results of an investigation and loosely entitled to know what action was taken, she said, but there’s nothing in the law that entitles them to see the report.

B.C.’s Information and Privacy Commissioner found in 2014 that the University of British Columbia was justified in withholding from a student portions of a report on her sexual assault complaint against a faculty member. The commissioner said the student’s “desire to learn more about the investigator’s reasoning and other people’s evidence does not outweigh the privacy rights of the faculty member and other third parties.”

In the University of Victoria student’s case, a letter attached to the report warned her not to discuss it with anyone other than her family, lawyer, counsellor, or police. Failure to maintain confidentiality, the letter warned, could result in disciplinary action.

The Canadian Press has a copy of the letter but the student declined to give the report to the news agency because she fears being disciplined by the university.

Pennington said she doubted the university would act on the threat, although it potentially could act under its code of conduct or if the student signed a non-disclosure agreement. She criticized the language of the letter as “enormously silencing.”

Joel Lynn, the University of Victoria’s executive director of student services, said the school encourages open dialogue about sexual assault. Support workers help students understand the need to protect third parties while assuring them that it’s “their story to tell,” he said.

At Brock University in St. Catharines, Ont., CBC reported a former student was warned in emails to keep quiet about an internal investigation that determined her professor made “an unwelcome sexual advance” and the incident involved “unwelcome physical touching.”

Brock president Jack Lightstone said complainants are free to discuss their experiences and the university regrets if it led the former student to believe otherwise. He stressed that the professor is no longer on campus or assigned to a class, and the school has since announced a task force to review its policies.

Johnson said once an investigation is complete, there are many reasons why universities may want to keep the results under wraps. Schools may want to ensure they’re not opening themselves up to lawsuits from the complainant, accused, or witnesses, or vicarious liability if an employee is at fault.

But the employment lawyer said he believes universities should disclose as much as possible if a finding of sexual harassment or assault has been made, from a legal and a public-relations perspective.

“Get out in front of the story,” he said. “You’re not doing yourself any favours, as university PR people, by looking like you’re covering up allegations.”