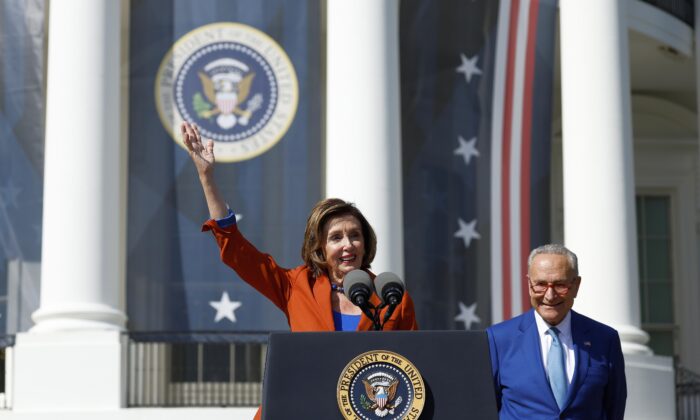 Unity in Love and Hate

There have been celebrations of national unity and purpose on both sides of the Atlantic Ocean during this past week.

In Britain, a country as badly politically divided as our own in many ways, hundreds of thousands of people stood in lines that were at times several miles long to catch a glimpse of the late queen’s coffin on its way from Scotland to Westminster Hall in London. Millions more watched on television the accession of the first new British sovereign and first king in 70 years.

Everyone seemed to agree that the mystique of royalty, long thought to have been on its last legs along with its power to transcend racial, sexual, religious, and even political division, was still alive and well after all.

Meanwhile, on the western side of the shining sea, a handful of apparently delusional Democrats gathered on the White House lawn to celebrate, ostensibly on behalf of the whole country, what one of them, House Speaker Nancy Pelosi, called “this glorious day”—of “inflation reduction.”

“What a thrill it is,” she said, “to be here to celebrate this life-changing legislation, making inflation—the Inflation Reduction Act. Inflation Reduction Act, so beautifully named for all that it does. As the name suggests, this landmark law is cutting costs and—inflation-fighting and driving down costs for kitchen table items for America’s working families.

“Mr. President, thank you for unifying and inspiring a vision of a stronger, fairer, safer future for all—for our children.”

At that point she broke off to instruct her little audience: “That’s an applause line.” And everyone duly applauded.

It might seem at first that the thanks due to President Joe Biden “for unifying and inspiring” were as undeserved as the tribute to the “Inflation Reduction Act”—not-so beautifully named for all that it quite obviously doesn’t do. On the same day as the White House shindig, there came the monthly announcement of the inflation rate, now annualized at 8.3 percent. The annual increase in the price of Pelosi’s “kitchen table items” was in double digits.

Clearly, the party had been planned in the expectation of somewhat different numbers.

No matter. If people were prepared to believe that the Inflation Reduction Act, which added over half a trillion dollars to the already high federal spending levels of the last two years, was actually going to reduce inflation any time this decade, another monthly increase of a degree not seen, until this year, since the 1980s would not faze them.

The question is how many people, given the Biden tendency to make such outrageously false statements as that the evacuation of American forces from Afghanistan was an “extraordinary success” or that the cost of yet another big-spending bill would be “zero,” are still prepared to believe this?

And here is where the Speaker’s premise of Biden’s “unifying” presidency comes in. If you read her words carefully, what she is congratulating the president for “unifying” is not people but “a vision.” That vision—“of a stronger, fairer, safer future for all”—may have been no more than a Democratic fantasy, but he and his Democratic colleagues are still supposed to get the credit for it.

She made this clear a couple of sentences later, saying, “This achievement is a testament to our unity, our optimism, our persistence.”

In other words, it’s our unity—Democratic, not national unity—to which she is paying tribute here, along with Democratic optimism and Democratic persistence (and Democratic staffers). Whatever may be the consequence of this legislation for the country at large, it’s got to be good for the Democrats, in a public relations sense.

Turns out that some such partisan unity and not the whole country’s must have been what Biden himself was talking about when he said in his inaugural address that “with unity we can do great things.”

“Uniting our [Democratic] people” took precedence both in the speech and in his administration’s subsequent practice over “uniting our nation.”

Say what you like about the Democrats, they’re team players. At least when they’re winning. Or think they are. Only when they lose do they split up into the rancorous factionalism, which seems to be the permanent condition of the Republican opposition, in government or out.

Everybody knows what a RINO is: a Republican In Name Only. That’s what pro-Trump Republicans call anti-Trump Republicans. In doing so, they’re expressing their envy for the Democrats’ sense of solidarity. No one has ever heard of a DINO.

The downside of such partisan unity, however, is that it leads to group-think and a distorted perception of reality.

I would like to think, for instance, that Pelosi really believes in all the wonderful things she says she believes the latest Democrat boondoggle will do for the country—including its actual reduction of inflation, as printed on the label.

That’s how distorted her sense of reality has become—almost as much as that of Biden himself. The alternative is to suppose that both of them are shamelessly lying. And that Democrat voters, unless they are similarly deluded, simply don’t care that they’re being lied to.

Charles Moore, the biographer of Margaret Thatcher, wrote in the defense of the British monarchy at the time of the Queen’s death: “At the heart of a successful state, there has to be something that most people do not want to argue about. If that deep thing is secure, you can have any amount of fierce argument on top of it (as is seen in the House of Commons).”

Our problem in post-Trump America is that there’s no longer anything that most people don’t want to argue about, not even the basic goodness of our country, its people, and its institutions.

Fortunately, the “we” in this case, as in Pelosi’s, is not the same as in “We, the people.” At least I hope it’s not.