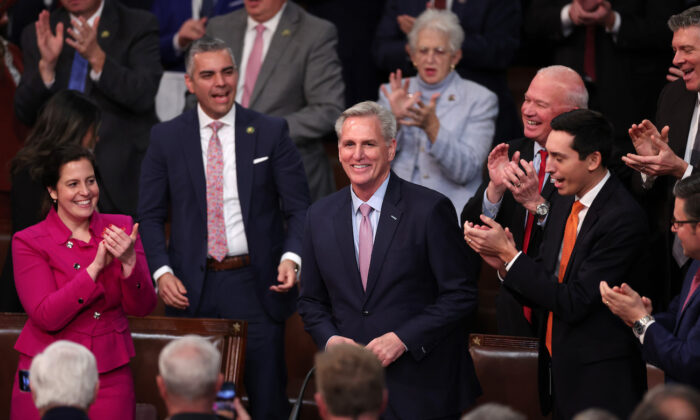 Republican members-elect celebrate as House Republican Leader Kevin McCarthy (R-Calif.) is elected speaker of the House in the House Chamber at the U.S. Capitol Building in Washington, on Jan. 6, 2023. (Win McNamee/Getty Images)

The principle that above all others has united the Republican Party since Ronald Reagan took it over from those content with permanent minority status for the GOP more than four decades ago is: Taxes must be cut, especially the types of taxes that hamper generating lots of jobs in the U.S. economy.

“From America’s grassroots to the White House, we will stand united as a party behind a bold program of tax rate reductions, spending restraints, and regulatory reforms that will inject new life into the economic bloodstream of this country,” declared the 1980 Republican Party platform in language with which Republicans from Reagan to the Tea Party spawned by the election of Barack Obama to the most hardcore MAGA loyalist of today would be comfortable.

Far from exhibiting complacency after the historic 25 percent Kemp-Roth income tax rate cuts during Reagan’s first term, in his second term he signed a tax reform and simplification law that brought the top income tax rate down to 28 percent. Considering that there were no pro-growth policies that can be identified during the Clinton administration, the Reagan tax reductions can be said to be responsible not only for the boom of the 1980s but for the tech-driven economic expansion of the 1990s as well.

Even Jimmy Carter in his successful 1976 campaign elicited cheers by regularly calling the U.S. tax code, with its 14 brackets and innumerable loopholes, “a disgrace to the human race”; yet over his four years in office, he was never able to bring its suffocatingly high 70 percent top rate down to his proposed 50 percent, or accomplish much else.

Which all goes to show that convincing voters you will cut taxes wins elections for both Republicans and Democrats. But reducing taxes once you’re in power is another matter entirely, especially if your party isn’t with the program. The middle-class tax cut that was the centerpiece of Bill Clinton’s 1992 “It’s the economy, stupid” campaign, which unseated an incumbent president, George H.W. Bush, running for reelection for only the second time in U.S. history up to then, was immediately abandoned and never did materialize during the eight years Bill Clinton held office.

Now House Republicans may stage a vote on taxes that telegraphs to their enemies across the aisle, and to voters seeking candidates with credibility, that they no longer “stand united as a party behind a bold program of tax rate reductions.” Instead, to use the Democrats’ soundbite, as much a distortion as it may be, Republicans support a new 30 percent national sales tax on thousands of items that Americans of modest means have to buy every day, “from groceries to gas,” as President Joe Biden put it.

A floor vote on the “Fair Tax” was demanded by a handful of House Republicans as one of the costs for their support of, or acquiescence to, Rep. Kevin McCarthy (R-Calif.) becoming speaker of the House of Representatives. It’s a bigger idea than Reagan’s 1986 reform, bigger even than the low-rate flat income tax championed by arguably the driving force behind Reaganomics, the late Jack Kemp, and still supported today by an eloquent champion of capitalism, Steve Forbes. Even Democrats like ex-longtime California Gov. Jerry Brown supported versions of the flat tax, in Brown’s case using it to become the last opponent to bow out of the 1992 race for the Democratic presidential nomination before it was secured by Clinton.

Abolishing the income tax and the Internal Revenue Service and replacing that system with a high-rate national sales tax is all about draining the “swamp” in Washington—but in fairness, so is the flat tax, which would end the class warfare-motivated graduated rate structure of progressive taxation.

Critics of the Fair Tax point out that the disbanded army of IRS agents would be replaced by two new bureaucratic entities tasked with collecting levies on sales and excises. Plus proponents concede there would have to be major allowances and loopholes from the beginning—those politically motivated accretions that ultimately produced the “disgrace to the human race” that Reagan succeeded in reforming. Worse still, unless the Sixteenth Amendment, which rendered taxes on income legal, is repealed, a future Congress could bring the income tax back to operate in addition to the new national sales tax, which could morph into a European-style hidden value-added tax—all of which would be the worst nightmare of those seeking to constrain the taxman and shrink government.

Steve Moore, chief economist of The Heritage Foundation, who served as a senior economic adviser to former President Donald Trump, and before that was one of the architects of the original version of the Fair Tax, this week told The Epoch Times that Rep. Buddy Carter (R-Ga.) and the other House Republicans behind the current version never contacted him, which seems odd, considering Moore’s free market/low tax bone fides and his decades of experience fighting the high-tax Washington establishment.

Moore calls the current federal tax system “an abomination” and would love to abolish the income tax, which he regards as “one of the worst ways to collect taxes,” the scrapping of which he says would mean “every worker gets a big pay raise.” But today he worries that a high rate national sales tax would inevitably mean a large black market in the many goods subject to it. For both economic and political reasons, a flat tax geared to tax consumption rather than wealth seems preferable right now, according to Moore.

Another advocate for tax reform, Grover Norquist, president of Americans for Tax Reform and the originator of the ATR Pledge against voting to increase taxes, has for decades kept Republicans in elected office honest on the issue. Interviewed by The Epoch Times, Norquist posed a question to House Republicans promoting a national sales tax.

“What would you say to a couple turning 65?” Norquist asked. “They’ve spent decades paying income taxes and now when they’re not earning income, you are going to end the income tax, and as they look to spend their life savings, you will cut their savings’ value by 30 percent because everything they buy will now be subject to the national sales tax? You know, 65-year-olds tend to vote.”

“Fair Tax” versus flat tax may be a debate worth having, but with no hope of either idea being enacted under a Democrat-majority U.S. Senate and a Democrat in the White House, this is no time to stage a floor vote that can only hurt the cause of lower taxes and smaller government.