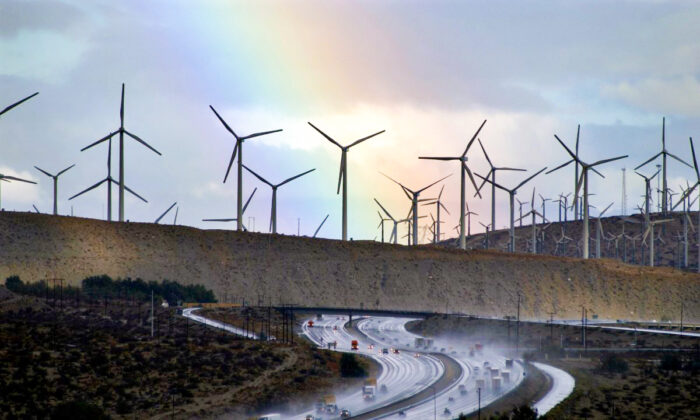 A rainbow forms behind giant windmills near rain-soaked Interstate 10 near Palm Springs, Calif., on on Dec. 17, 2002. (David McNew/Getty Images)
Energy

Steve Lance
Steve Lance is the host of Capitol Report, a political news show based in Washington aimed at providing a direct channel to the voices and people who shape policy in America. Capitol Report features all of the political news of the day with expert interviews and analysis.
View profile
Follow
and Naveen Athrappully

The United States is going through a tense situation with regard to energy supply and demand, and the Biden administration is exacerbating the problem, said Jerry Simmons, president of the Domestic Energy Producers Alliance.

In a recent interview for NTD’s “Capitol Report” program, Simmons pointed out that since crude oil is a global commodity, any event that has a global impact will end up affecting prices in the United States. Coming out of the pandemic, many were expecting things to go back to normal. But that has not happened, he noted. Fears of a global recession, and the fact that America is “two quarters into what defines a recession” is affecting commodity markets, including oil.

Crude oil production in the country has been increasing since 2020 following a drop during the initial period of the COVID-19 pandemic. The United States now produces 12 million barrels per day of oil, Simmons said, while admitting that production might be a “little slower” than what some might expect.

On the flip side, crude oil inventories are not doing well, recently falling 6 percent below the five-year average, he said.

“We don’t have a lot of spare capacity out there, you know, a lot of extra crude laying around, if you will, or extra gasoline laying around,” Simmons said. “So it’s a very tight rope that we’re walking right now, with the supply and demand.”

As a large consumer like the European Union seeks to change the mix of where it procures its energy products due to the fallout from the Russia–Ukraine conflict, it will have a “ripple effect worldwide,” he added.

Simmons also criticized the excessive push for renewable energy, indicating mistakes made in Europe. Germany placed a great deal of emphasis on renewable energy sources like solar and wind.

The country ended up paying “the highest price for electricity on the planet,” he said. Germany does not have enough electricity. The country will keep a few coal-fired plants running, while some of its nuclear power plants are due to be shuttered.

If Germany shuts down those nuclear reactors as well, the country could be facing “a very severe winter.” In some parts of Europe, people are lining up to buy coal for winter, Simmons said. The United States is guilty of importing such policies, he noted.

“This new, negotiated deal in the Biden administration that just dumped so much of our taxpayer money into unreliable renewable sources is just—it’s shocking to me,” Simmons stated.

He pointed to the state of California which is planning to ban the sale of internal combustion engine vehicles by 2035 and wants everything to be electric powered. However, the state presently does not even have enough electricity to avoid blackouts.

California has asked electric car owners not to charge their vehicles but then wants to force people into using electric vehicles in the future, something Simmons calls “absurd.”

Politicians do not understand energy, he insisted.

“They don’t understand how the world works and how we power what we do every day.”