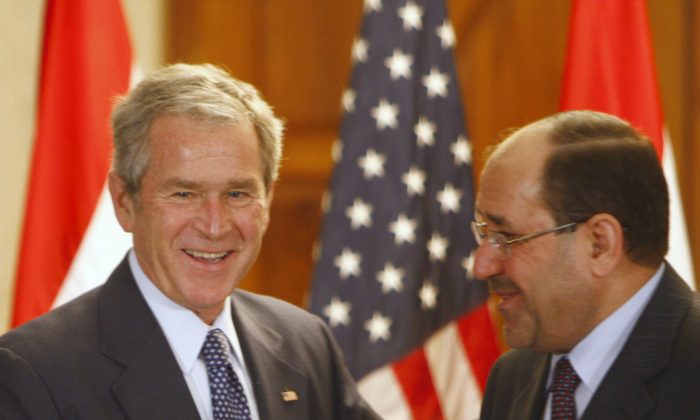 Haider al-Abadi made his first visit to the White House April 14 as the prime minister of Iraq and requested expedited delivery of U.S. weapons and F-16s to fight ISIS.

The prime minister’s trip to Washington offered an opportunity for the White House to refine not only its policy toward Iraq but also to resolve how Iraq fits within a broader strategy for the Middle East.

Currently, Washington’s regional policy is narrowly focused on achieving three objectives: the defeat of the ISIS, principally in Iraq and then in Syria; neutralization of other extremist groups in the region that could threaten to the United States or our allies; and the successful conclusion of a nuclear agreement with Iran.

A weakened Iraq has resulted in intensified regional competition between Iran and the Sunni powers of the Gulf.

Washington needs to better understand the dynamics in the region if it is to contribute to bringing about stability rather than exacerbating conflict.

Both the invasion of Iraq in March 2003 under President George Bush and the manner in which the United States departed Iraq under President Obama left the Iraqi state weak and altered the balance of power in the region in Iran’s favor.

The result has been intensified regional competition between Iran and the Sunni powers of the Gulf—foremost among them Saudi Arabia and the United Arab Emirates—which has exacerbated existing fault lines, strengthened sectarian extremists, and transformed local grievances over poor governance into proxy regional wars in Syria and Yemen.

The Obama administration has touted the significant territorial gains against ISIS achieved in recent months. It is, in fact, heartening that U.S. airpower led to the defeat of ISIS in Tikrit. After weeks of fighting, the Iranian-backed Shiite militia, which made up the bulk of the forces, got bogged down and suffered heavy casualties.

At this point the Iraqi government turned to the United States, which agreed to airstrikes only after the militias were sidelined and Iraqi security forces allowed to lead.

However, these military gains alone are not sufficient to defeat ISIS.

The challenge facing Iraq is how to change the very conditions that allowed for the rise of ISIS: corrupt elites who extract the resources of the state for their own interests, the growing Iranian influence, and the sense of Sunni alienation and humiliation.

The ISIS was born out of al-Qaeda in Iraq, albeit revived by Syria’s sectarian civil war and former Prime Minister Nouri al-Maliki’s sectarian policies. Regardless, if Iraq’s fundamental problems are not addressed, then the tactical military successes against ISIS will not be sustainable and will not prevent a son-of-ISIS arising in the future.

Only Sunnis in Iraq and Syria can truly defeat ISIS. But Sunnis will only turn against ISIS when they see that the extremists cannot win and that there are better alternatives, and when they receive support from the Iraqi government and the United States. So far, little progress has been made in helping Sunnis to fight ISIS.

The future of Iraq continues to hinge on genuine reconciliation—and the decentralization of power. However, Iraqi elites have made little headway constructing a collective national identity, which all components of society relate in agreeing with the principles for governing the state.

Only the United States can act as an external guarantor in the Middle East.

While Prime Minister Abadi understands the need to devolve more authority to provincial governments, he is faced with the challenge that non-state actors in Iraq today are stronger than the state. He is trying to assert his control over the Iranian-backed Shiite militias and at the same time gain U.S. support to balance Iranian influence.

He is widely viewed as more collegial and pragmatic than his predecessor Nouri al-Maliki, and he has shown a willingness to reach out to Kurds and Sunnis, to replace corrupt and overly sectarian officers and to improve Baghdad’s relations with Sunni regional powers.

However, Abadi is facing greater constraints than his predecessor: While he may have the will to do what clearly is needed, he lacks the capacity to make the necessary reforms. Beyond the domestic political challenges, Iraq is also facing a budget deficit of $22 billion due to the fall in oil prices, and it is beset with an increasing humanitarian crisis as tens of thousands of Iraqis have fled their homes.

Helping Abadi requires more than sending weapons. He needs U.S. support to help with reconciliation, further Iraq’s regional integration, and diversify the economy away from oil.

While some in Washington may hope that a nuclear deal will lead to Iran becoming a responsible partner in stabilizing the Middle East, there is an equal if not stronger likelihood that with the lifting of sanctions Iran will use its improved economy to further project its power, including tilting the internal Iraqi balance toward the more sectarian actors it has historically favored.

In response—and out of fear that the United States is acquiescing to Iran as a regional hegemon—Arab countries are mobilizing to resist what they view as an expanding Iranian empire as witnessed by the attempted creation of an Arab army to fight in Yemen.

The region does not generate its own stability nor resolve its own conflicts. Stability in the region requires a better balance of power and regional security architecture. And this can only be procured by the balancing acts of an external guarantor. And that can only be the United States. If left to others, the outcome will certainly be increasing disorder.

The United States needs to be bold and take the opportunity provided by all the unrest to assume a renewed role in the region as balancer-in-chief. This requires a vision of what the region could be—and greater engagement. It means treating Iran skeptically, but constructively, and convincing the Arab states that the United States is still their ally. In this way, the United States has the potential to reorder the region.

Emma Sky is a senior fellow at Yale University’s Jackson Institute and author of “The Unraveling: High Hopes and Missed Opportunities in Iraq.” Copyright © 2015 YaleGlobal Online and the MacMillan Center at Yale.e