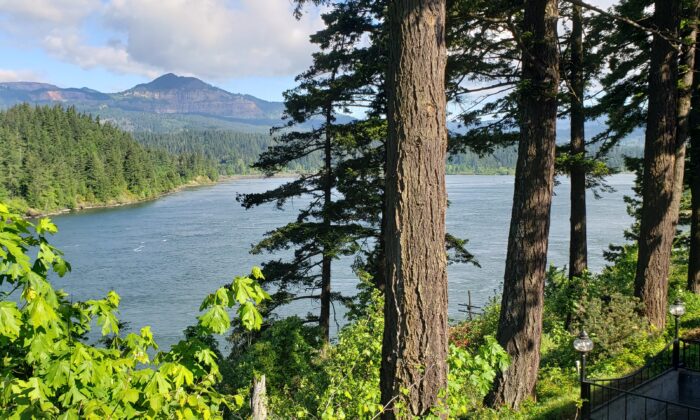 The drive from Portland to Mt. Hood follows the Columbia River to Hood River. This was taken near the Bridge of the Gods, which connects Oregon with Washington. (Anita L. Sherman)
Environment

The United States and Canada have entered their 12th round of negotiations on the Columbia River Treaty, a 1960s-era agreement between the two countries that covers flood control, hydroelectric power generation, and other facets of water resources management in the massive, cross-border Columbia River Basin.

The agreement’s flood control provisions are set to expire in 2024, 60 years after the treaty’s 1964 ratification, with the latest round of negotiations starting on Jan. 10. Initial negotiations over the new agreement started in May 2018 under U.S. President Donald Trump and Canadian Prime Minister Justin Trudeau.

Under the terms of the original treaty, Canada provided 15.5 million acre-feet of storage for Columbia River flow at those dams. In exchange, the United States paid Canada $64.4 million for flood control until 2024, along with half of the downstream hydropower energy produced in the United States as a result of the water released at those Canadian dams.

That 50–50 split has been a point of contention for the United States. A 2013 recommendation on the future of the treaty after 2024 by the Bonneville Power Administration (BPA), part of the U.S. entity charged with treaty implementation, stated that “an imbalance has developed in the equitable sharing of the downstream power benefits resulting from the treaty.”

According to a U.S. Department of State webpage, one major focus of the talks is “improving the ecosystem in a modernized Treaty regime,” alongside flood risk management and hydroelectric power.

The BPA’s 2013 recommendation noted that the treaty’s original language “does not identify ecosystem considerations.”

The document goes on to advise that such considerations ought to form the basis of a third main purpose of a modernized treaty, noting that the Columbia River Basin’s environmental well-being should be “a shared benefit and cost of the United States and Canada.”

The Province of British Columbia, which has the bulk of the rights and obligations associated with the treaty on the Canadian side, has emphasized similar concerns.

“The key areas of interest are flood risk management, hydroelectric power and ecosystems. Canada has also raised the issues of increasing co-ordination of Libby Dam operations and increasing flexibility for Canadian operations,” Katrine Conroy, the minister responsible for the Columbia River Treaty, said in a November 2021 statement prior to negotiations on Dec. 9.

In a 2012 review of the treaty’s effects, the Canadian Ministry of Energy, Mines and Natural Gas stated that with the construction of the Canadian treaty dams and reservoirs during the 1960s and 1970s, “entire ecosystems were removed.”

Barbara Cousens, an emerita professor at the University of Idaho who has written extensively about the treaty, told The Epoch Times that the Canadian dams created as a result of the treaty have been a major hindrance to efforts to reintroduce salmon above the Grand Coulee Dam. She said that people living near the dams were also displaced.

The original treaty was spurred by 1948’s devastating Vanport Flood, which wiped the Portland, Oregon-area community of Vanport off the map.

“We saw that we urgently needed to address flooding and prevent the loss of life and property as the region developed,” Jill Smail, chief U.S. negotiator on the treaty at the State Department, said in remarks to the Second Columbia River Treaty Town Hall in September 2018.

Cousens said: “The people in the basin phrased it two ways. One is they said that the United States had moved the floods from Portland upstream to Canada.

“The other way they phrased it was that all of the hydropower benefits flowed to the coast—and by that they meant Victoria and Vancouver.”

Negotiations on both sides are being informed by local tribes and First Nations. In the case of the United States, representatives of the Kootenai Tribe of Idaho, the Confederated Tribes of the Umatilla Indian Reservation, and the Confederated Tribes of the Colville Reservation are part of the State Department’s negotiating team. On the Canadian side, tribes in the Columbia Basin Indigenous Nations have participated.

“Interestingly, a lot of bringing ecosystem function to the table was driven by the tribes,” Cousens said.

The Columbia River Treaty Review, which conveyed British Columbia’s decision to continue with the treaty, states that “the construction of the Treaty dams and reservoirs caused much hardship to communities and First Nations that were directly affected.”

Officials with the Province of British Columbia and the U.S. Department of State were unable to comment by press time.