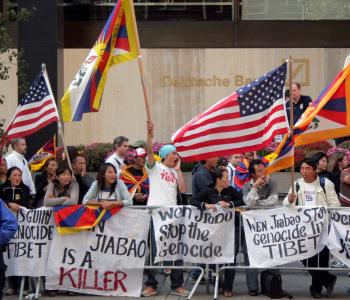 Congressman Tells U.N. to Get Out

NEW YORK—As the United Nations General Assembly takes place through next Wednesday in Manhattan’s Upper West Side, U.S. Rep. Tom Tancredo has a special message for the meeting of leaders from around the world: get out.

The Colorado Representative said the United Nations is an organization known for its bureaucracy and conciliatory actions, and has become a showcase for anti-American dictators like Venezuelan leader Hugo Chavez, Cuban leader Fidel Castro and Iranian leader Mahmoud Ahmadinejad.

"The U.N. has coddled brutal dictators, anti-Semites, state sponsors of terrorism, and nuclear proliferators—while excluding democratic countries from membership and turning a blind eye to humanitarian tragedies and gross violations of human rights around the globe," Tancredo said.

The Colorado Representative on Tuesday introduced legislation that would effectively move the United Nations headquarters out of the United States. That same day, Mr. Ahmadinejad made headlines when he said in his speech to the assembly that the “American empire” is essentially crumbling.

“The American empire in the world is reaching the end of its road, and its next rulers must limit their interference to their own borders,” said Mr. Ahmadinejad.

He also reiterated his anti-Israel position, “Today, the Zionist regime is on a definite slope to collapse, and there is no way for it to get out of the cesspool created by itself and its supporters.”

Rep. Tancredo also contends that the United Nations has become a rubber stamp for Chinese and Russian foreign policy initiatives—blocking membership of Taiwan, a democratic country, and failing to take any meaningful steps to halt the ongoing genocide in Sudan or the nuclear programs in North Korea and Iran.

"The U.N.'s continued presence in the United States is an embarrassment to our nation, and the time has come for this ineffective organization to pack its bags and hit the road," said Tancredo.

Any change in the location of the U.N.’s headquarters is unlikely, given that its location in the United States is seen as a positive status symbol by New York City and the nation.