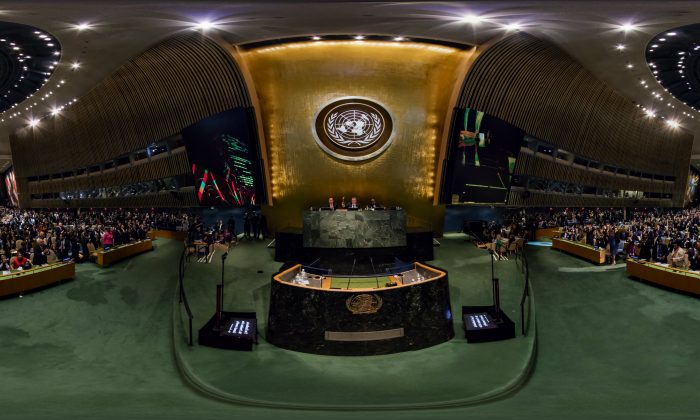 An equirectangular panoramic image of the opening of the U.N. General Assembly and Sustainable Development Summit at the United Nations in New York City, on Sept. 25, 2015. (Benjamin Peterson/Getty Images for U.N.)
Opinion

Within the rarefied world of the United Nations (U.N.) system, the year 2015 will hold special historical importance—it is the target year for the countries of the world to meet the Millennium Development Goals (MDGs) that were launched in 2000.

This self-imposed deadline has come and now member states are launching the next round of goals, termed the Sustainable Development Goals (SDGs). The latest exercise in high-level development planning attempts to learn the lessons of the MDGs, which achieved mixed success but focused the world’s attention on global inequality at multiple levels.

A noticeable feature of the SDGs is the strengthening of business and industry involvement in reaching the targets. For many activists this is perceived as a co-option of the development agenda by the private sector.

Much of the distrust stems from past performance of corporations on social and environmental measures, justifiable concerns about their lack of democratic accountability, and the growing scale of financial dominance.

But is this fair?

The size of corporations in comparison with countries is often presented as a distorting influence. Under this claim, big businesses wield the same influence as countries of similar economic scale.

For example, the size of Walmart’s earnings is often compared to the gross domestic product (GDP) of Norway. But these comparisons are inaccurate.

In an important 2002 analysis, Professor Paul DeGrawe and former Belgian Senator Felip Camerman noted this comparative problem, but the message still has not caught on with activists.

A subsequent more detailed study undertaken by Tufts University in 2007 laid out the parameters of corporate power in comparison with countries. It estimated that the 100 largest corporations account for 4.3 percent of world GDP.

However, even within the context of this self-interest there are clear development imperatives that can provide win-win opportunities, such as community development funds that are part of impact-benefits agreements. However, regulatory oversight must not be neglected. Even businesses recognize the role of regulators to ensure a level playing field for improved social performance costs being borne by businesses.

Activists are right to be concerned about “greenwash,” given the structural obligations of short-term profit maximization under which the private sector operates. Therefore, what is crucially important is that the SDG engagement with the private sector not be used to moderate strict regulatory enforcement.

The activists are also correct to note that corporate tax evasion, perpetuation of unequal pay within corporate structures, and revenue transparency must remain paramount concerns.

However, as with other voluntary initiatives, it is limited in its impact on smaller companies with limited resources. Business engagement with international law, particularly the large number of international environmental treaties, is an essential part of preventing greenwash.

It is also important to note that some of the other critiques of the SDGs, exemplifying the “economics of optimism” and being Utopian, could also be addressed through private sector engagement.

Businesses could inject essential pragmatism and prioritization to address the critique that the SDGs neglect cost-benefit analysis (such criticisms are being presented by organizations such as Bjørn Lomborg’s Copenhagen Consensus Center).

The United Nations is a behemoth bureaucracy which has to serve such a diverse range of national constituents that reaching consensus often requires dilution of any central message. Yet it is the most inclusive governance mechanism we have to address planetary problems and hence deserves our patience.

Inefficiency is often a cost to be borne for deliberative and democratic pluralism. Business interests must remain an important part of this pluralistic engagement by the United Nations.

However, the different incentives that inherently lead to divergence between the public and private sectors must not be ignored. Hence the metaphor of “tough love” is perhaps instructive.

The SDGs should embrace business but be willing to hold it to account, to admonish and to castigate where appropriate. Through such firm but fair means a more constructive partnership between the public and the private spheres of development can be forged.

Saleem H. Ali is chair in sustainable resource development at The University of Queensland, Australia. This article was previously published on TheConversation.com