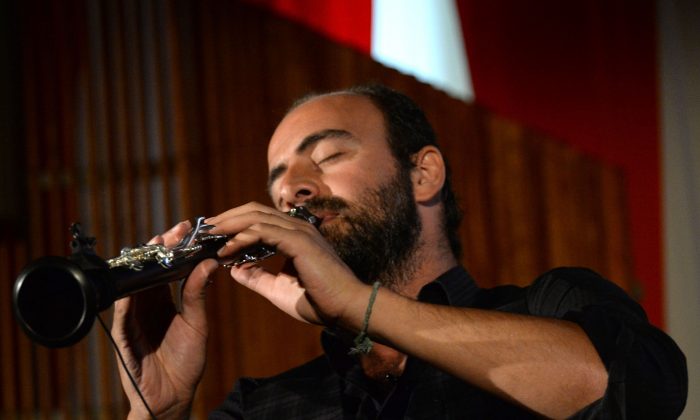 United in Protest Against Horror in Syria

I just saw an incredible performance by two remarkable Syrian artists, Kinan Azmeh and Kevork Mourad, working together against the horror ravaging their country and in support of the Syrian refugees. Their performance, called Home Within, was presented at the Miller Theater at Columbia University in New York.

Their work is an audio-visual intended to reflect the current nightmare in Syria and its consequences. Home Within, which has toured through North America and Europe, interweaves illustrations, visual aids, and original compositions.

Through their combined efforts, both Azmeh, a clarinetist, and Mourad, a painter and visual artist, offer their personal interpretation of the events now happening in Syria that have shattered the conscience of people of good faith worldwide. That they are two remarkable artists makes their work even more powerful.

Dialogue is a concept I live with–live by, in a way. Especially making music.
— Kinan Azmeh, Syrian clarinetist

Azmeh was born in Syria in 1976 and studied music at the Arab conservatory of music in Damascus, where he majored both in electric engineering and music. He received his master’s degree and graduate diploma in music from the prestigious Juilliard School in New York City. When he was 21 years old he was the first Arab musician to win the first prize in the Nicolai Rubinstein International Youth competition in Moscow.

Azmeh is one of the five members of the band Hewar, which was formed in 2003. The name of the band, which means dialogue in Arabic, reflects Azmeh’s interests in transcending cultural barriers and misconceptions, and building bridges of peace and communication among peoples.

Hewar’s music, which draws on both Arab and Western sources, reflects his interest and the philosophy of life. “Dialogue is a concept I live with–live by, in a way. Especially making music,” he has said.

In 2009, Azmeh performed in the Arabesque Festival at the Kennedy Center in Washington, D.C. and has played on several occasions with Daniel Barenboim’s West–Eastern Divan Orchestra.

Azmeh and Mourad met in New York City in 2003 and have been collaborating ever since. Initially, they created a collage of pieces mainly for themselves, but then decided they should be shared with a wide audience. With his painting and visuals, Mourad is essentially reacting with his own creations to Azmeh’s music. “I am a storyteller in my own way,” said Mourad.

I am a storyteller in my own way.
— Kevork Mourad, Armenian-Syrian painter and visual artist

Kevork Mourad is an Armenian-Syrian artist born in Syria in 1970 and, like Azmeh, has been greatly affected by the tragic events in their country of origin. He received his Master of Fine Arts from the Yerevan Institute of Fine Arts in Armenia and has shown his paintings in several countries.

The Gyumri Museum in Armenia has six of his pieces in permanent residency, and several more pieces are at the Armenian Library and Museum of America in Watertown, Massachusetts. He was part of a group show at the NYU Small Works Gallery in 2005 and his digital piece, “The Map of Future Movements,” toured as part of a group exhibition in Jerusalem and Ramallah.

Mourad’s work was exhibited at Rafia Gallery in Damascus in 2009 and his solo exhibition was later shown at the Courtyard Gallery in Dubai in 2010. He has also had solo shows in Kuwait, Los Angeles, and Providence, Rhode Island. He has performed at several prestigious museums around the world and has collaborated with several world-class musicians.

Mourad and Azmeh have also collaborated with Yo-Yo Ma’s Silk Road Project. In “Home Within,” Mourad’s creative visual effects are a perfect backdrop to Azmeh’s haunting music. The piece titled “A Sad Morning, Every Morning” was the first piece in their performance and the cornerstone of the project. Through their collaborative efforts, these two artists are living evidence of the transformational power of art.