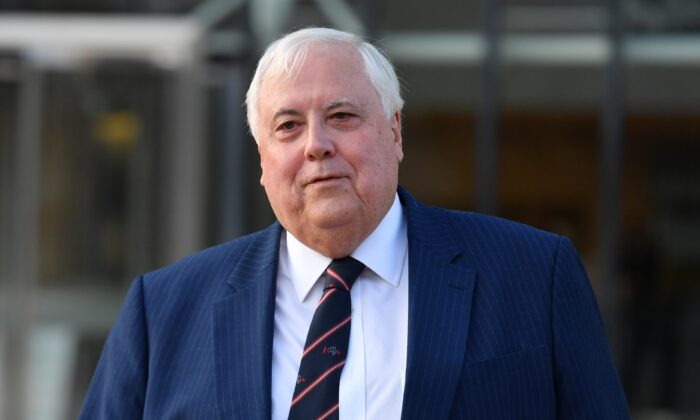 Australian mining magnate Clive Palmer has voluntarily deregistered his United Australia Party despite having a senator in parliament.

The Australian Electoral Commission, which is responsible for the country’s electoral system, published a notice on Friday saying the right-wing party was deregistered on Sep. 8, 2022.

Victorian Senator Ralph Babet said he will continue sitting in parliament under UAP banner, saying the deregistration was due to “administrative reasons.”

He also told Nine networks that the party would be registered before the next election.

“This has actually happened before. We do it in between the elections to save on the administration, the party is not going anywhere. It’s staying right where it is. The UAP is here forever,” he said on Friday.

“Of course, myself being a parliamentary leader of (the) United Australia Party, we own the trademark, we will be immediately re-registered next time.”

The UAP was registered on Dec. 12, 2018 following the deregistration of the former Palmer United Party.

During the COVID-19 pandemic, the party called for the removal of the lockdowns, domestic vaccine passports and vaccine mandates. On the UAP’s website, the party outlines policies that focuses on cutting tax and maximising revenue from Australia’s mineral resources.

The party’s founder, Palmer, owns large mining businesses such as Mineralogy, Waratah Coal, Queensland Nickel and has a net worth of up to $13.01 billion in 2021.

However, the party failed to secure a seat during the 2019 federal election despite the multi-million dollar advertising campaign before successfully winning a seat in the 2022 election.

According to his profile on UPA’s website, the party’s sole parliamentary member, Babet, is described as “a strong supporter of our constitutional rights and freedoms.”

“As a former business owner, Ralph understands at the grass-roots level what is required for economic prosperity in this country,” Palmer said of Babet.

“He will take the fight to the mainstream parties to deliver a better economic future for all Australian families.”