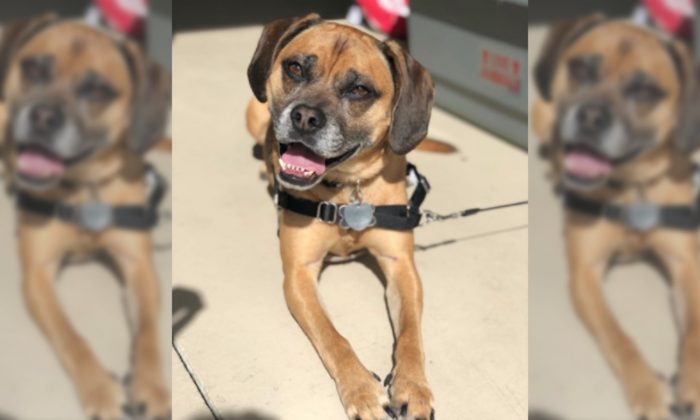 Dudley, a dog that was put on the wrong United Airlines flight. (Credit: Michael Jones via Storyful)
US News

United Airlines put a dog on the wrong connecting flight again. A plane on its way to St. Louis was diverted in order to meet the dog’s owners in Akron, Ohio.

Dudley’s owners were traveling back from Fort Myers, Florida, to Akron, Ohio. While transferring planes for a connecting flight in Newark, New Jersey, the dog was placed on the wrong flight by United staff, The Points Guy reported.

The passengers on the flight that was diverted due to the dog were all compensated for the delay, according to a statement from United obtained by The Points Guy. After the dog was dropped off in Akron, the passengers reached St. Louis a little over two hours later than scheduled.

Dudley’s owners were told they would be recompensated for the $348 they spent to check the dog.

United Airlines had two other dog mishaps recently. On March 15, CNN reported that a dog bound for Kansas from Oregon was instead shipped to Japan. When a family went to a cargo facility to retrieve their German shepherd, they instead found a Great Dane. The Dane should have been the dog on the flight to Japan. The mistake occurred during a flight connection mistake in Denver.

Just before that incident, a French bulldog died on a United plane that was traveling from Houston to New York. The dog died after flight attendants urged the owners to put it into the overhead bin, CNN reported.

June Lara, a passenger on the same flight, said that flight attendants “insisted” that the dog go overhead “for three hours without any kind of airflow,” in a Facebook post. Lara referenced the Humane Society and mentioned that dogs with short nasal passages, like bulldogs and pugs, are especially prone to oxygen deprivation.

“United Airlines does not care about the safety of their furry travelers. This poor family paid $125 for their pet to be murdered in front of them. There is no excuse for the pain this family is suffering,” Lara added in the post. “Today, I boarded my last United Airlines flight.”