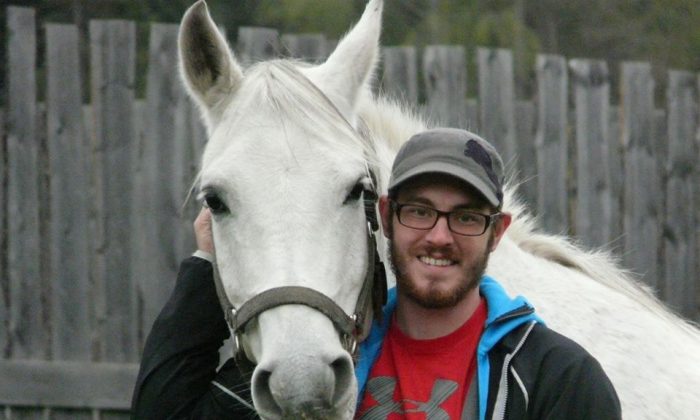 Canadian Forces veteran CJ Wilneff and Partner at the Can Praxis ranch. The Can Praxis equine program is helping Wilneff, who served in Afghanistan and suffers from PTSD, regain a sense of control over his life. (Courtesy CJ Wilneff)
Canada

Struggling with flashbacks, nightmares, anxiety, depression, body tremors, and a spiralling substance addiction, it was two years before he finally sought help.

That step led him to Can Praxis, a unique program that uses horses to help PTSD sufferers and their families heal. Now, having almost completed the program, Wilneff says he is regaining a sense of control over his life.

“I was hiding before and I wasn’t being open and honest about everything—all of my thoughts and where I was mentally,” he says, adding that the program has helped him improve his relationship with fiancée Stacey Quinn.

If you’re having a stressful day it doesn’t take long for the horse to pick up on it.
— Canadian Forces veteran C.J. Wilneff

“[Can Praxis] really helped me get those things out and learn how to communicate them effectively. That was a big weight off my shoulders.”

The program, which takes place at the Can Praxis ranch near Rocky Mountain House, Alberta, works in three phases. In the first, participants and their spouses or children take a class on communication and conflict resolution with Can Praxis co-founder Steve Critchley, a 28-year veteran of the Canadian Forces and an international mediator, facilitator, negotiator, and trainer.

In the second phase, the couples work through simple tasks with the horses, guided by registered psychologist and Equine Assisted Learning Facilitator Jim Marland. In phase three, participants partake in a multi-day horse-riding expedition, solidifying the skills and lessons learned in the previous phases.

The reason the program works, says Marland, is its combination of classroom theory and real-life practice with the horses. But it’s also the horses’ special nature and character that helps bring about healing. Many of the participants, who hail from across Canada, have told him it was the first thing that worked for them, while other treatments had failed.

“The heart of it is that the horse, as an animal that’s preyed upon, is watching very carefully, and if the horse is comfortable with the people around it will become relaxed and probably quite willing to comply with their instructions,” Marland explains.

“The moment the horse senses some conflict—too much leadership, not enough leadership, confusion, or anxiety—it notices it immediately, and then the horse’s body language will change. … That’s an invitation to have a conversation about what’s happening between the couple.”

Wilneff was surprised how intuitive the horses were, and bonded with his horse, Partner, almost immediately.

“When we first got to see all the horses I pointed at one and said, ‘I want that horse.’ The minute I walked into the pen, Partner literally walked right over to me and started rubbing his head on my chest. It was like he knew that I wanted to be with him and he was going to be my horse,” he says.

“The horses are amazing. You come to learn very quickly that they can pick up on all of your emotions. So, if you’re having a stressful day it doesn’t take long for the horse to pick up on it. Ultimately, it will treat you in the way that you’re treating yourself.”

The program is free of charge for participants, including their food, travel, and sometimes even child and pet care costs. It is primarily funded by Wounded Warriors Canada, a charity that supports Canadian soldiers wounded overseas and their families. Last week, Wounded Warriors donated $170,000 to Can Praxis, which will help 40 more couples go through the program.

Wilneff says that one of the most important components for him was the relationships he and his fiancée developed with other veterans and their spouses. He has formed friendships with many of the participants, meeting regularly outside of the program and on social media. Can Praxis has a Facebook forum for all alumni members to offer each other instant support if they are having a bad day or just need to talk to someone.

“It’s just amazing that no matter when you need the support you write something on that Facebook wall, as in, ‘I’m struggling, I could use somebody to talk to,’ and within seconds or minutes somebody else that’s done the program is in contact with you or is messaging you,” he says.

“It’s just amazing the support you get from absolutely everybody that’s been involved. … That’s a big part of it, the continuing support, and having numerous people to talk to when you need to.”

The simple opportunity to be together in a supportive environment, where everyone deeply understands what it’s like to go through PTSD, is invaluable for veterans, says Marland, who hopes to expand the program to Central and Eastern Canada.

The program has given Wilneff a sense of hope for the future—something that is a relatively new feeling for him.

“I’m coming home with a greater appreciation of my life, which as somebody with PTSD is a really hard thing to find,” he says.

“I’ll also come home with a love of horses.”