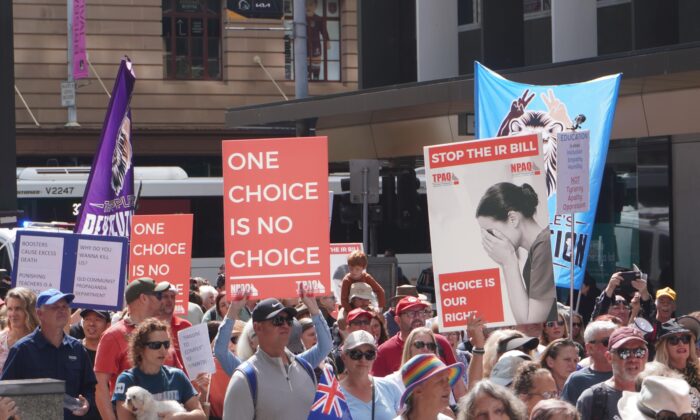 Members of the Teachers' Professional Association of Queensland (TPAQ) take part in a protest against the state Department of Education's decision to cut the pay of unvaccinated teachers in Brisbane, Australia on Aug. 31. (Courtesy of TPAQ)
By Daniel Y. Teng

The head of the start-up Red Union—formed in response to the vaccine mandates—is vowing to fight the Queensland Labor government’s decision to effectively bar the organisation from operating in the state.

Industrial Relations Minister Grace Grace said she made “no apologies” for the move.

“Changes provide protections against organisations and individuals who make false and misleading claims about being able to represent the industrial interests of employers and employees,” she said in a statement on Oct. 28.

During her explanatory speech in June (pdf), Grace told the state Parliament she was responding to “growing confusion and concerns.”

“This follows the emergence of self-proclaimed entities promoting industrial representation capabilities without adhering to the strict regulatory requirements to be recognised by a registered organisation under the [Industrial Relations] Act and not being subject to the same level of reporting, accountability or democratic processes.”

Under the changes, the industrial watchdog can declare an organisation ineligible to register as a union and hand out penalties of up to $3,722 (US$2,380).

According to the explanatory notes (pdf), the new laws will also introduce a “review mechanism” that can see applications for a new union blocked if there is an objection on the grounds it could be “mistaken for an organisation under the [Industrial Relations] Act; or an entity that has functions that are the same or comparable.”

In effect, this would open the door for objections to any new organisation being set up in a field that already has union representation, including teaching or medicine.

In response to the law, Red Union’s Managing Director Jack McGuire called it a “farce” saying the group was already dealing with 800 active matters before the Queensland Industrial Relations Commission.

“Grace moved a last-minute amendment to the legislation to ensure that those 800 could stay on the record because if you let 800 people self-represent [it will be a mess],” he told The Epoch Times.

“In my view, it’s a politically motivated attack. But I think ultimately workers will see through it because they value freedom of association over this cynical attack.”

“It will cost tens of thousands, no doubt, but that’s what we have to do. We’ll probably end up having to restructure and all that,” he said.

McGuire also said the provisions would reinforce the “monopoly status” of legacy unions.

The Red Union umbrella group was founded in 2020 in response to the widespread acceptance of vaccine mandates by Australia’s traditional union groups. Membership has steadily grown to around 17,000 across fields like nursing and teaching, with the largest portion in the state of Queensland.