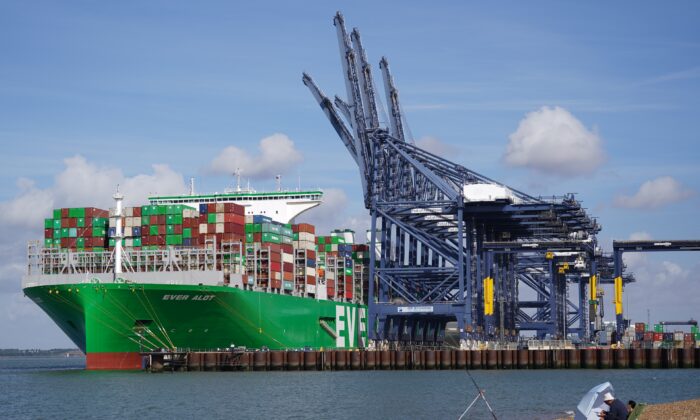 The cargo ship Ever Alot docked at the Port of Felixstowe in Suffolk, England, on Aug. 21, 2022. (Joe Giddens/PA Media)
UK

The UK’s supply chain “will be severely disrupted,” a union official said on Monday as the strike at the country’s largest container port enters the second day.

Some 1,900 Unite members at the Port of Felixstowe, around three-quarters of the port’s workforce, started an eight-day strike on Sunday in a dispute over pay after the union rejected an offer of a 7 percent raise, as well as a single payment of £500 ($592).

Unite said the offer isn’t good enough to catch up with inflation, and the port blamed the union for not bringing the deal to its members.

Unite national officer Robert Morton told Sky News on Monday that he accepts “the supply chain will be severely disrupted” by the strike, calling it “one of the unfortunate parts of things like this.”

He also promised more strikes unless the union’s demands are met.

Morton said Unite had been asking for “a minimum of the rate of inflation,” adding, “The RPI [retail price index] at the moment is at [12.3 percent].”

But he also suggested the union would accept less, saying “you don’t always get what you want” in negotiations, and that there may be “a figure between 7 percent and 12.3 percent that’s acceptable to my membership.”

Put to him that a 7 percent pay increase is a better offer than what was offered to the National Health Service (NHS) staff, Morton said he believes NHS staff “should be paid more than anyone else,” but port workers work “in all kinds of weather, they’re very highly skilled people and I think they deserve more from the company who is making massive profits.”

Asked whether the deal was presented to the union members, Morton said it wasn’t.

He said the workers are not “militant people” but they had told the union to not bring back offers less than the rate of inflation.

Speaking to the same broadcaster, Paul Davey, head of corporate affairs at the Port of Felixstowe, said Unite should ask its members about the deal.

“Almost bizarrely, we have about another 500 jobs which are covered by another branch of Unite—that branch did put the offer to their members and their members have voted two-to-one in favour of accepting it,” he said.

“This branch need[s] to do the same thing. They say they’re a democratic union but they won’t give their members a vote.”

Responding to claims that workers cannot afford to take a real-term pay cut, Davey said it’s “happening to everybody,” and the deal being offered is “much better than the vast majority are getting.”

“We’re pleased and we are proud that we pay very well here at the Port of Felixstowe. The average pay here is 40 percent more than the national average. The pay offer that we’ve offered is twice what other people are getting,” he said.

“So our workers will be much better placed to weather the cost-of-living storm that we’re seeing than the vast majority of people in the country.”

Davey also said the pay deal being negotiated “runs only until the end of this year,” with a new pay deal due on Jan. 1 next year.

According to an analysis carried out earlier this month by Russell Consulting, the strike could result in over $800 million in trade being disrupted.

Logistics UK, an industry body representing freight transport businesses said on Sunday that it was “not expecting massive disruption” from the strike because the Port of Felixstowe is not a just-in-time delivery port.

Shane Brennan, CEO of the Cold Chain Federation, also said he’s “not predicting significant problems in the short term as a result of” the strike, telling Talk TV that “delays and rescheduling can be more flexible” for container shipping, which is “a longer-term game.”