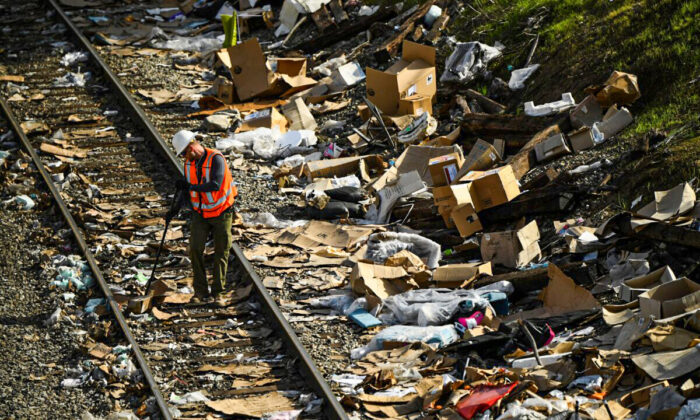 A railroad workers inspects a track as they repair a section of Union Pacific train tracks after a train derailed from the tracks, which are littered with thousands of opened boxes and packages stolen from cargo shipping containers, in Los Angeles on January 16, 2022. (Patrick T. Fallon/AFP via Getty Images)
Southern California

LOS ANGELES—Union Pacific crews worked to clear tracks after a train derailment on Jan. 15 in Lincoln Heights, near an area where thousands of empty boxes were left behind by cargo thieves.

“At this time, there is no estimated time for completion, and the cause remains under investigation,” Union Pacific spokeswoman Robynn Tysver told City News Service. “No one was injured.”

The derailment occurred around 4 p.m. on Jan. 15 at the intersection of San Pablo Street and Valley Boulevard, which was blocked indefinitely, according to USC, which has its Health Science Campus nearby.

The area has been plagued by cargo thefts in recent days, and video from the scene showed the ground littered with empty boxes from companies such as UPS and Amazon.

Union Pacific has asked the LA County District Attorney’s Office to prosecute anyone arrested for the crimes.

“Some cases presented to our office by Union Pacific have been filed, such as burglary and grand theft, while others have been declined due to insufficient evidence,” the DA’s Office said in a statement provided to ABC7.

“We make charging decisions based on the evidence. Our office takes Union Pacific’s concerns seriously and hopes to discuss this issue more in the coming weeks.”