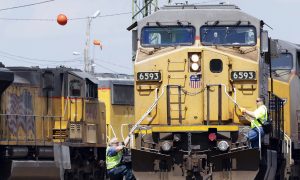 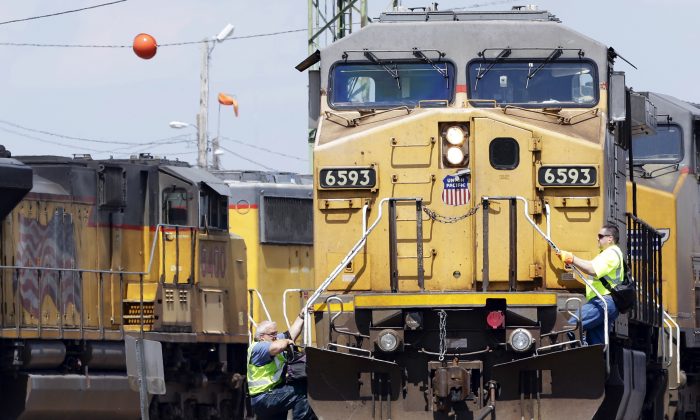 A train (L) operator dismounts a Union Pacific locomotive while another operator climbs up, at a rail yard in Council Bluffs, Iowa., on June 6, 2014. (AP Photo/Nati Harnik)
Business

The Omaha, Nebraska, company beat Wall Street expectations on both net income and revenue, sending shares up more than 4 percent to a new high for the year.

CEO Jack Koraleski said the economy continues to improve at a moderate pace so total volume should grow again this year, but forces outside the control of Union Pacific make forecasts for 2015 difficult.

“Clearly, one of the biggest uncertainties is the outlook for energy markets, which will bring both challenges and opportunities as we move ahead,” Koraleski said.

Analysts surveyed by FactSet expected the railroad to report earnings per share of $1.52 on revenue of $6.1 billion.

Falling energy prices have provided a big tail wind for railroads in that they spend less on fuel, a major cost. In the fourth quarter, Union Pacific’s average diesel price fell 14 percent to $2.66 per gallon.

On the other hand, lower oil prices may affect the volume of shipments for everything from crude oil to sand used in the hydraulic fracturing wells that have boomed over the past decade.

Union Pacific’s performance measures show that the railroad’s service is still not as good as it used to be. For instance, average train speed fell 8 percent in the fourth quarter and the amount of time trains spent dwelling in rail yards increased 11 percent.

The answer to most of Union Pacific’s concerns is more locomotives, but Edward Jones analyst Logan said those are on back order because all major freight haulers need them to handle rising volumes as the economy recovers.

“The railroads are doing everything they can,” Purk said. “These other companies just can’t spit out locomotives fast enough.”

Union Pacific operates 32,400 miles of track in 23 states from the Midwest to the West and Gulf coasts.