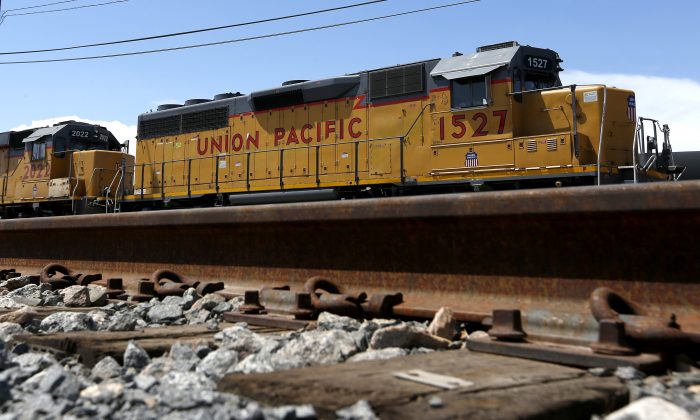 A Union Pacific locomotive sits on a track in a railyard in Phoenix, Arizona, on July 15, 2013. (Ross D. Franklin/AP Photo)
US

The railroad freight company said in a statement to The Epoch Times that it’s working to help its customers in light of national supply issues.

“Union Pacific is committed to proactively supporting our customers, and we are working with them to address the impact of several disruptive events,” the statement reads.

The company stated that it removed rail cars to ease congestion and added 100 additional locomotives to its fleet. It also relocated 80 crew members to support high-demand areas and is training 450 new employees “in a tight labor market, with more in the pipeline to graduate this summer.”

Farmers Told to Cut Back

Union Pacific also asked customers to reduce their growing inventories; it’s partnering with customers to “begin a metered approach in the coming days.”

“This allows us to continue serving all customers while simultaneously working through a backlog of cars, restoring our ability to process volume—an approach we successfully applied last year with West Coast intermodal traffic,” the company stated.

The announcement comes at a time of worldwide nitrogen fertilizer shortages because of the war in Ukraine and broad sanctions against Russia, a global supplier of fertilizer ingredients.

CF Industries Holdings, a leading manufacturer of hydrogen and nitrogen products, reacted with concern to the railroad’s announcement.

On April 14, the company issued a statement informing customers it serves by Union Pacific rail lines that “railroad-mandated shipping reductions” would result in delays during the spring application season.

The railroad also stated that it would be unable to accept new rail sales involving Union Pacific cars “for the foreseeable future.”

“The company understands that it is one of only 30 companies to face these restrictions,” CF Industries said.

The company ships to customers via Union Pacific rail lines from complexes in Donaldsonville, Louisiana, and Port Neal, Iowa.

“The rail lines serve key agricultural areas such as Iowa, Illinois, Kansas, Nebraska, Texas, and California,” CF Industries said. “Products that will be affected include nitrogen fertilizers such as urea and urea ammonium nitrate and diesel exhaust fluid, an emissions control product required for diesel trucks.”

CF Industries is North America’s largest producer of these products.

“The timing of this action by Union Pacific could not come at a worse time for farmers,” Tony Will, president and CEO of CF Industries, said in a statement. “Not only will fertilizer be delayed by these shipping restrictions, but additional fertilizer needed to complete spring applications may be unable to reach farmers at all.

“By placing this arbitrary restriction on just a handful of shippers, Union Pacific is jeopardizing farmers’ harvests and increasing the cost of food for consumers.”

CF Industries stated that the railroad’s announcement came “without advance notice” and that it was ordering certain shippers to reduce the volume of private cars on its railroad by 20 percent, “effective immediately.”

According to Union Pacific’s key performance metrics, as of April 16, the company ran a total of 154,417 weekly carloads compared to 164,768 two weeks ago and 157,864 three weeks ago. The company had 201,334 cars in volume, a daily snapshot “of rail cars in regular movement, hold, or released at customer status” by the railroad.

CF Industries stated that it believes it will complete delivery of products already contracted for rail shipment to Union Pacific destinations, “albeit with likely delays.”

“However, because Union Pacific has told the company that noncompliance will result in the embargo of its facilities by the railroad, CF Industries may not have available shipping capacity to take new rail orders involving Union Pacific rail lines to meet late-season demand for fertilizer,” the company stated.

According to the U.S. Department of Agriculture (USDA), farmers use about 21 million tons of chemical fertilizer each year to boost crop production. Nitrogen fertilizer is a critical additive to maximize crop yields.

“If farmers are unable to secure all the nitrogen fertilizer that they require in the current season because of supply chain disruptions such as rail shipping restrictions, the company expects yield will be lower,” CF Industries said. “This will likely extend the timeline to replenish global grains stocks. Low global grains stocks continue to support high front month and forward prices for nitrogen-consuming crops, which has contributed to higher food prices.”

In the meantime, CF Industries stated that it intends to “engage directly” with the federal government to prioritize fertilizer shipments.

“CF Industries’ North American manufacturing network continues to produce at a high rate to meet the needs of customers, farmers, and consumers,” Will said. “We urge the federal government to take action to remove these Union Pacific rail shipment restrictions to ensure this vital fertilizer will be able to reach U.S. farmers when and where they need it.”

Melisa Augusto, vice president of marketing for the Agriculture Retailers Association, said the organization didn’t have a comment since “we haven’t seen anything official from Union Pacific.”