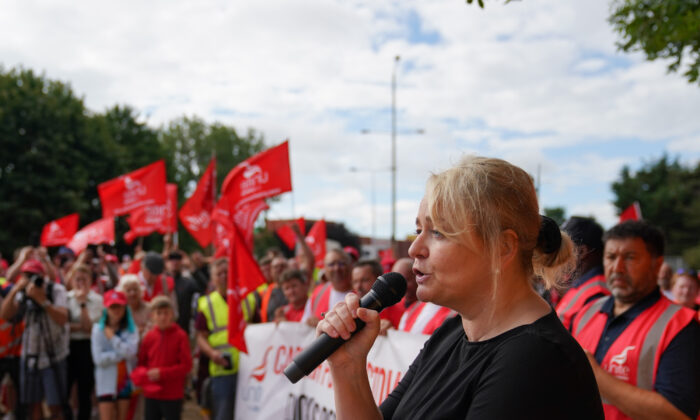 Unite General Secretary Sharon Graham speaks to her members on a picket line at one of the entrances to the Port of Felixstowe in Suffolk, England, on Aug. 24, 2022. (PA Media/Joe Giddens)
UK

The ongoing strike at Britain’s largest container port will escalate unless workers are given an improved pay offer, a trade union boss has said.

Almost 2,000 workers at the Felixstowe port who are members of the Unite union started an eight-day strike on Aug. 21 after the union rejected an offer of a 7 percent raise, as well as a single payment of £500 ($592).

The port, which employs about 2,550 people, handles roughly 4 million containers from 2,000 ships each year, nearly half of the containerised freight entering the UK.

Addressing the striking workers on the picket line on Aug. 24, Unite General Secretary Sharon Graham said that disruption at the port “is not necessary” and bosses “just need to pay the 10 percent” increase in wages that the union is demanding.

“We will escalate this dispute unless they come back with a revised offer because this is ridiculous that they’re making this huge profit and they’re asking workers to take a pay cut,” she said.

The port authorities have criticised the union for not bringing the deal to its members.

A port spokesperson said: “A lot of our employees feel let down by Unite. Many want to work and are angry that they have not been allowed to vote on the latest company offer.

“Unite say they are a democratic union but their words don’t match their deeds and they are promoting a national agenda at the expense of many of our employees.”

The port said it has offered a deal that is equivalent to a rise of 8.1 to 9.6 percent. It noted that the Port of Felixstowe staff union, representing approximately 500 positions, has voted to accept the same pay offer.

“Many employees have told us they want to come to work but feel too uncomfortable to do so,” said the spokesperson.

According to an analysis carried out earlier this month by Russell Consulting, the strike could result in over $800 million in trade being disrupted.

Logistics UK, an industry body representing freight transport businesses said that it was “not expecting massive disruption” from the strike because the Port of Felixstowe is not a just-in-time delivery port.

Shane Brennan, CEO of the Cold Chain Federation, also said he’s “not predicting significant problems in the short term as a result of” the strike, telling Talk TV that “delays and rescheduling can be more flexible” for container shipping, which is “a longer-term game.”