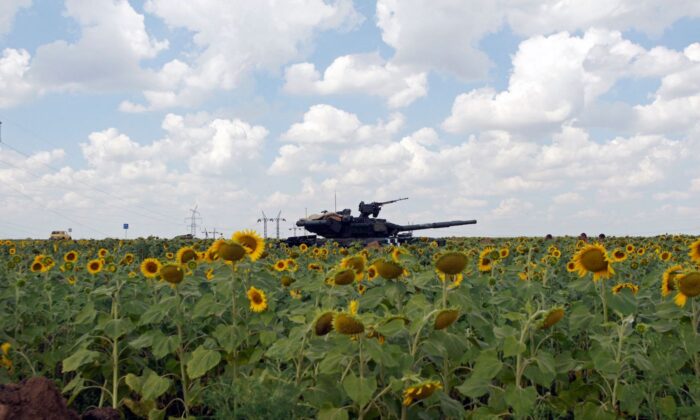 A Ukrainian army tank in a sunflower field near Donetsk in eastern Ukraine, on Aug. 5, 2014. Ukraine accounts for almost 50 percent of the world’s sunflower oil exports. (Andrey Krasnoschekov/AFP via Getty Images)
Business & Economy

British multinational consumer goods company Unilever has altered some of its recipes to use rapeseed oil instead of sunflower oil owing to a global shortage of the latter triggered by Russia’s war against Ukraine.

Edible oils are the “most significantly impacted commodity sector” that Unilever is currently dealing with, according to the company.

“One of the things Unilever’s good at is flexing our formulations so that we can take advantage of differential cost increases,” chief executive Alan Jope said on a call with journalists to discuss earnings, according to Reuters.

“As supplies of sunflower oil have got really tight from the Ukraine, we’ve been able to switch to other oils like rapeseed oil quite effectively.”

Unilever typically uses sunflower oil in its offerings like sauces and ice creams. The company had raised product prices by 8 percent in the first quarter. Unilever warned that more hikes were coming as the brand accommodates the costs of inflation and war.

Ukraine accounts for almost 50 percent of the world’s sunflower oil exports. The ongoing war has disrupted the supply of the commodity.

The shortage of sunflower oil has opened up a business opportunity for Argentina.

“There’s no other country that can absorb the global sunflower production crunch like Argentina,” Guillermo Pozzi Jauregui, head of the Argentine Sunflower Association, told Bloomberg. “Farmers will plant as much as they can, but they’ll be limited by the availability of seeds.”

Jauregui expects sunflower seed planting in the 2022-2023 season to reach up to 2 million hectares, which would be the highest in 14 years and around 20 percent more than the last season.

Argentina is also the world’s largest supplier of soy oil.

Meanwhile, the global cooking oil industry has suffered another jolt as Indonesia declared a ban on palm oil exports. Palm oil accounts for almost 60 percent of the world’s vegetable oil shipments, and Indonesia is the largest exporter.

“This is happening when the export tonnages of all other major oils are under pressure: soybean oil due to droughts in South America; rapeseed oil due to disastrous canola crops in Canada; and sunflower oil because of Russia’s war on Ukraine.”