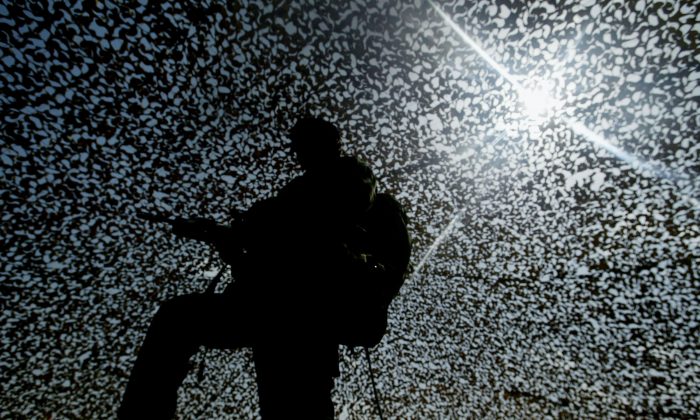 LONDON—Brits mean only one thing by the phrase “unidentified alien”—and it’s nothing to do with immigration.

So when an elite UK military squad was detained and roughed up to the refrain of “unidentified aliens” while probing the defenses of a U.S. Air Force base in England, they decided to retaliate by teaching their U.S. allies the one and only British meaning of “alien.”

In late December 1980, U.S. servicemen reported seeing strange lights on two nights in Rendlesham Forest near the Air Force base they were using in Suffolk in East England.

After the incident came to light three years later, more witnesses stepped forward to describe a craft landing in the trees. The Rendlesham Forest incident became Britain’s most renowned UFO mystery, said to be the world’s first officially observed, and confirmed, UFO landing and contact.

Naturally, the skeptics had their explanations—such as the local lighthouse, brights stars, and a fireball.

David Clarke, who unearthed archive documents on the sighting over a decade ago, says he was contacted by writing three years ago by a military insider, whom he calls Frank.

He says the source, who did not reveal his name to Clarke, claimed it was a Christmas hoax cooked up by Britain’s equivalent of the Navy SEALS—the SAS.

Skeptical, Clarke sat on it for three years while he made some inquiries, before publishing the claims on Dec. 27.

If Frank is to be believed, the SAS regularly tested UK and U.S. military security by probing the perimeters of Royal Air Force Woodbridge in Suffolk.

One night on August 1980, an SAS squad parachuted into the U.S. compound using black parachutes. But the base had upgraded their radar system. The soldiers were captured and interrogated for 18 hours.

According to Clarke, Frank wrote, ‘The language used by the young U.S. officer was unusual (to British ears) in that he repeatedly referred to the Brits as unidentified aliens who posed a threat in their presence on the sovereign U.S. soil of the airbase.”

‘They Called Us Aliens’

“After their release, the troopers made no complaint at their rough treatment, but determined to get their own back on the [U.S. Air Force] for the beating that they had received. … ‘They called us aliens! Right, we’ll show them what aliens really look like!’”

They spent months plotting, and rigged up a mock UFO landing, which the U.S. servicemen spotted from their base.

“The matter should have ended there,” Frank wrote. “Unfortunately, a senior U.S. officer (Lt. Col. Halt) led the U.S. contingent out into the forest on the second night and took along his tape recorder. The hovering and whizzing lights were sufficiently impressive for him to send a report to the [Ministry of Defence].

“A few red faces but also some satisfaction and amusement followed.”

The UK Ministry of Defence has kept the same stance all along, according to the Telegraph: “No evidence was found of any threat to the defence of the United Kingdom, and no further investigations were carried out. No further information has come to light which alters our view that the sightings of these lights was of no defense significance.”

But, according to Nick Pope, who used to run the government’s UFO programme, the “no defense significance” was “a standard soundbite that we routinely trotted out for the media and the public.”

Pope says the phrase was never formally defined but just indicated whatever happened involved no overt threat.

“It certainly doesn’t mean the case was explained and indeed around five percent of the sightings we investigated remained unexplained.”

“In evidential terms it is worthless; a ufologist claims someone contacted him, claiming to be in the SAS, and claiming the events were attributable to a prank,” he said, via email. “It’s a classic friend of a friend story.”

“Having run the MoD’s UFO project and having undertaken a cold case review of the incident I can confirm that no explanation for the Rendlesham Forest incident was ever found. Thus, although the MoD terminated its UFO project in 2009, the official verdict is that the case remains unexplained.”

“We looked at all the theories —and the claim that this was a prank isn’t new—and none of them fit the facts.”

Horsfall is doubtful of Frank’s authenticity as an SAS member, saying he writes with a command of grammar that “excludes most SAS operatives during this period including the commissioned officers.”

Horsfall, who was a member of the SAS at that time, said he also would have expected to hear rumors of such a prank, but didn’t.

“We did undertake planned training actions against British military establishments but never against those of the U.S. forces,” he said.

“The idea of a revenge prank by [SAS] isn’t plausible as the rules controlling pyrotechnical devices within the regiment were very strict and any such action could have resulted in those involved being returned to unit.”

Clarke says that Horsfall’s misgivings are echoed by Col. Ted Conrad, one of the most senior U.S. Air Force officers involved.

This article was updated to include comments from Nick Pope.