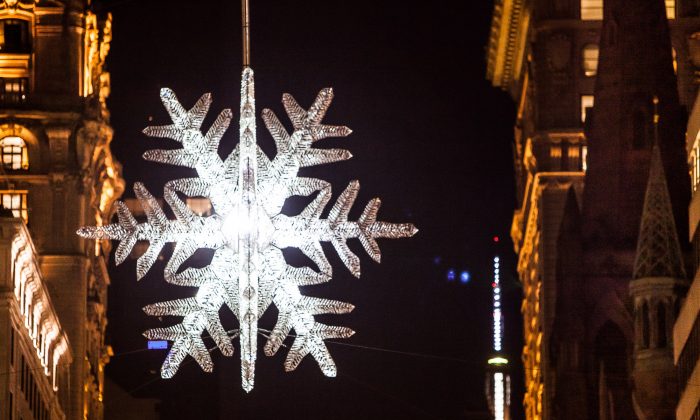 NEW YORK—Maybe it was the first snow last week, or the lighting up of the giant snowflake over Fifth Avenue Friday, but holiday season is in the air in New York City.

“New York is always like this,” said Jussara Eberhard from Miami. “The city, the people, the lights, it’s like ‘Christmas is coming to town.’”

She came to visit her friends in the city and heard about the ceremony to light up the metal and glass 23-foot snowflake hanging over Fifth Avenue and 57th Street. “I was curious,” she said.

New York City is one of the most popular holiday destinations in the world, with 5 million expected to visit this season, according to NYC and Co. It is also the most visited big city in the United States with 52 million visitors last year and the city where tourists spend the most money.

The snowflake was installed on Nov. 3, and lit on Nov. 15. It seemed like its arrival started off an avalanche of holiday decorations along Fifth Avenue and around the city.

Among the first ones was the Louis Vuitton store right beneath the snowflake, with its modest set of decorations at the end of October, followed by almost every other store along the avenue.

While Uniqlo, on Fifth and 53rd, just installed its snowflake patterns, Tiffany & Co. already has its whole facade covered with mural-style holiday themes, and the Cartier building has been transformed into a giant wrapped-up present.

Not Just a Snowflake

But the snowflake doesn’t just herald the season, it has it’s own story. It was created in 2005 by designer Ingo Maurer to include 16,000 crystal prisms from the Baccarat Crystal manufacturer and was then donated to the United Nations Children’s Fund (UNICEF).

It became a symbol of a campaign to prevent the deaths of 6.6 million children, who succumb every year to preventable diseases.

New York Knicks player and newly appointed UNICEF Ambassador Tyson Chandler, flipped the light switch. “I grew up in a tough neighborhood and a lot of times, I understand, children just want hope, and to me, UNICEF symbolizes hope for those children,” he told Epoch Times before the ceremony.