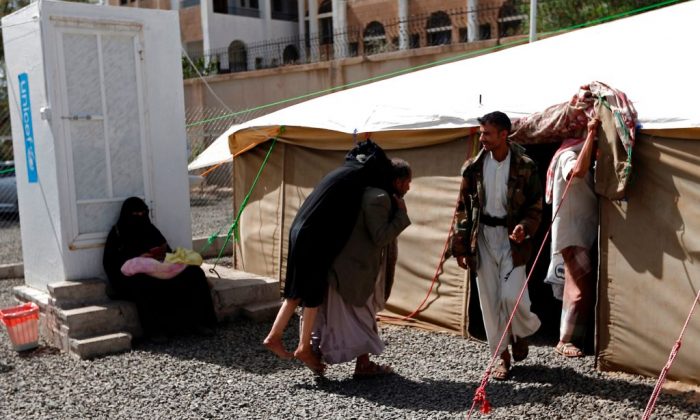 A Yemeni man carries a woman suspected of being infected with cholera as they arrive for treatment at Sabaeen Hospital in Sanaa, on June 13, 2017. (MOHAMMED HUWAIS/AFP/Getty Images)
Middle East

UNICEF, the United Nations International Children’s Emergency Fund, has sent 36 tons of aid to Yemen, hoping to beat back the two-month cholera outbreak which has spread to 218,000 people.

Cholera spreads because of poor sanitation, when sewage gets into food and water. Prevention is the best cure.

Yemen has been riven by civil war for the past two years. The Saudi-backed government is under assault by the Iran-backed Houthi rebels. The outbreak is most severe in Houthi held areas.

“This deadly cholera outbreak is the direct consequence of two years of heavy conflict,” said a joint statement from the World Health Organization and UNICEF.

The two groups say collapsing health and sanitary systems have cut 14.5 million people off from clean water and sanitation, increasing the spread of the disease. Worse, the people that can help are not getting paid.

“An estimated 30,000 dedicated local health workers who play the largest role in ending this outbreak have not been paid their salaries for nearly 10 months,” reads the statement.

The groups are calling for those salaries to be paid and for the warring groups to end the conflict.