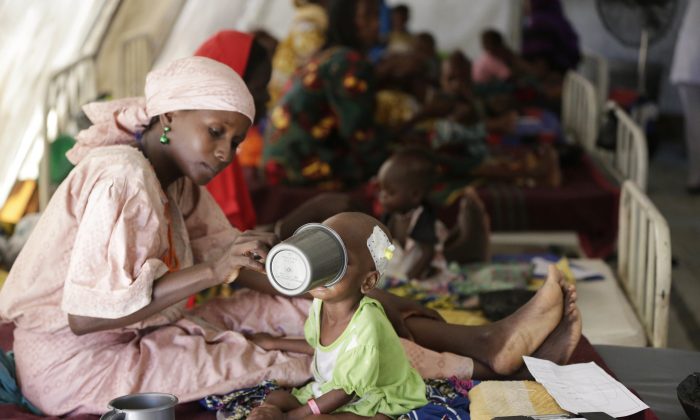 A mother feeds her malnourished child at a feeding center run by Doctors Without Borders in Maiduguri, Nigeria, on Aug. 29, 2016. (AP Photo/Sunday Alamba)
International

UNICEF: 80,000 Children Will Starve to Death in Nigeria

LAGOS, Nigeria—Nearly a half million children will face starvation in northeastern Nigeria next year and 80,000 will die if they don’t get treatment in the humanitarian crisis created by Boko Haram’s Islamic uprising, the U.N. Children’s Agency warned Tuesday.

“What is already a crisis can become a catastrophe,” UNICEF executive director Anthony Lake said.

His statement said the 400,000 children at risk of starvation represent just a fraction of the suffering among some 2.6 million refugees in the seven-year insurgency that has killed more than 20,000 people.

“If they do not receive the treatment they need, one in five of these children will die,” Lake said.

“Large areas of Borno state are completely inaccessible to any kind of humanitarian assistance. We are extremely concerned about the children trapped in these areas,” he added.

Boko Haram attacked a military-escorted humanitarian convoy in July about 70 kilometers (45 miles) from Maiduguri, the birthplace of the insurgency, wounding a UNICEF worker, two other aid workers and two soldiers.

A rocket-propelled grenade slammed into the windshield of a bullet-proof vehicle, one that Nigerian President Muhammadu Buhari has accused the agency of buying instead of spending money on people in need. UNICEF said the vehicle was a donation.

Lake spoke just days after Buhari accused the U.N. and private international aid agencies of exaggerating the crisis to seek donations. Buhari declared that Boko Haram was “technically defeated” a year ago and appears fixed on maintaining that fiction.

While soldiers from a multinational force of Nigeria and neighboring countries have pushed the extremists out of towns and many villages they occupied, attacks on military outposts and suicide bombings of soft targets continue.

The Associated Press has reported since September that children already are dying of starvation in Maiduguri, the biggest city in Nigeria’s northeast that is easily accessible. Doctors Without Borders said in November that thousands of kids already have died, including 10 percent to 25 percent of children admitted to its 110-bed Maiduguri emergency treatment center.

Nigeria’s Senate is investigating allegations that government agencies are diverting food aid that could help prevent those deaths.

Buhari was elected in March 2015 on a platform that pledged to finish off Boko Haram and halt endemic corruption.