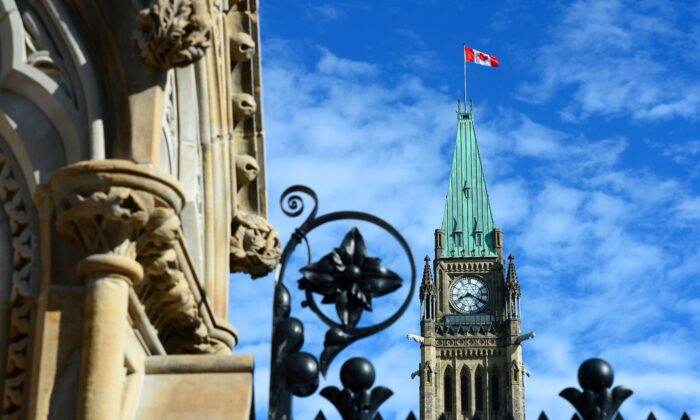 The Peace Tower is seen from the front gates of Parliament Hill in Ottawa in a file photo. (The Canadian Press/Sean Kilpatrick)
Canada

‘Unhealthy Partisanship’: Move Afoot to Improve the Workings of Parliament

Canada’s Parliament is increasingly moving away from forming decisions based on debates, with decisions instead largely dictated by parties or party leaders, says a veteran MP.

A recent report backs up this view, showing the majority of MPs believe that “unhealthy partisanship” has become more prevalent in Parliament, with democratic practices declining, particularly in the areas of MP independence and debates.

In the current minority Parliament, some MPs are working toward modernizing the House in order to increase efficiency and eliminate parliamentary dysfunction, among other issues that have long plagued the legislative body.

Engaged in the discussions is Conservative MP Michael Chong, who has been committed to democratic reform ever since he was elected in 2004.

In his view, Parliament has increasingly gravitated toward conformity to the point that new ideas are more difficult to pursue, let alone get a vote on. Consequently, the members’ autonomy has been eroded.

“Parliament is the heart of our democracy and it should be a place where the people’s representatives come together and have real debate and decide on the outcomes of the vote,” Chong said in an interview.

“The debate today is often perfunctory because the outcome of the vote is predetermined. It’s not an environment where alternative and individual views can be heard. It is mostly dictated by parties and party leaders.”

In addition to this is a 10 percent growth in bill length, which makes it more difficult to scrutinize the government since larger bills come with increased restrictions on the time allowed for debate. The report also noted a “hardening partisanship,” with a rise in hostility between members of different parties and deliberative spaces such as caucuses being turned into “instruments of the leader and the staff” instead of a place where leaders can be held to account.

Chong says the centralization of power in parties can be attributed to the changes that have taken place over several decades, one being leadership offices’ budgets. The Official Opposition Office has a budget of around $10 million for its operations, while the Prime Minister’s Office is around three times as much. Along with this is a change in the dynamic between member and party dating back to the 1960s and 1970s, resulting in a situation in which party discipline collides with the member’s ability to champion his or her constituents’ interests.

“Before the 1960s, you could have had several hundred MPs that were standing primarily as individuals, and party affiliation was secondary. Right now, party is primary. As a result, the constituency they’re elected to represent is also secondary to the party,” he explains.

“What we’ve done in terms of the structure is put leaders over top of our parliamentary democracy,” he adds, noting the existence of a “list system” that was put in place decades ago as a way to coordinate who would get to speak in Parliament, giving the leader “de facto” control.

“Those who speak are chosen from a computer screen. I know from first-hand that members are told they’re not allowed to get up to speak.”

Spearheading efforts to improve how Parliament works is Liberal MP Kevin Lamoureux, who says that based on conversations he’s had with MPs, most are open to change.

Changes Lamoreaux would like to see include allowing MPs more time in their ridings by reducing the amount of time spent travelling to and from Ottawa for votes, and a dual chamber to allow for more rigorous debate.

In his view, the current minority government provides a perfect opportunity for establishing the consensus needed for change to happen.

“There is an opportunity for us to work with all political parties,” he told the Hill Times.

“In a minority situation, I see that as a positive, because then people are a little bit more at ease because they realize that no party can make it happen, it’s going to have to be done on a consensus. So, I think that in itself is a good incentive for individuals that truly care about how things proceed in the House of Commons in terms of rules to get together and see if we can get some changes.”

Both Conservative and Liberal governments have contributed to the institutional problems, says Chong, with the current situation being “decades in the making.” And with discontent bound to intensify if things remain how they are, he says it’s imperative that politicians take reform seriously.

“Our Western democracies are one of the great inventions. And it’s not just the right to vote, it’s the ability to hold leaders accountable and enforce checks and balances. Good social outcomes and future prosperity rely on a properly functioning system,” he says.

“If we don’t respond to these frustrations, there’s always a chance that we’ll see more populist-type forces if there is a sense our democracy isn’t working well. As elected officials, we have to acknowledge these concerns and try to come up with solutions.”